No doubt a backyard garden gives you instant access to fresh produce, so you don’t have to visit the farmer's market or grocery store every now and then. But no garden is ever complete without a chili pepper plant.

And in the capsicum annuum, Serrano and Jalapeno peppers are the best and commonly cultivated among home gardeners. But which should you pick?

If you’re still scratching your head on this, you might want to stick around till the end of this article because we’ve set an epic chili match of Serrano pepper vs Jalapeno pepper. 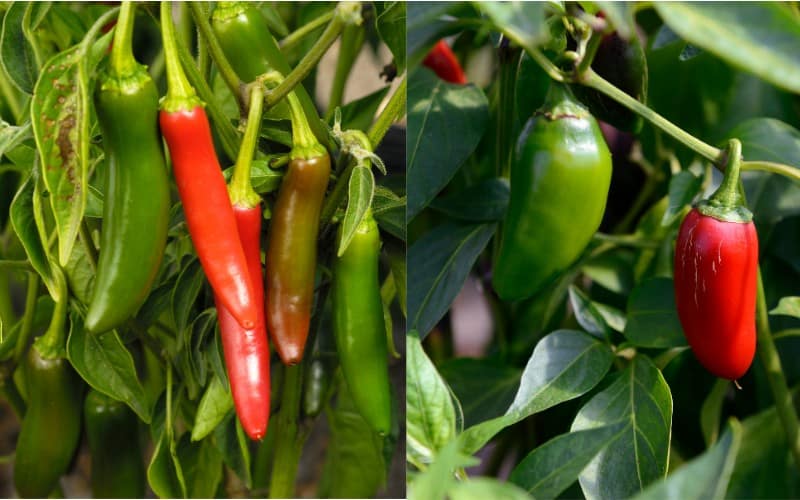 You must pay attention to their key similarities, as well as the differences, to enable you to pick the victor that adds the healthy kick of flavors you deserve. Just as the judges in boxing estimate the winner with the most punch, control, and technique during each round.

Because let’s face it:

The leading cause of why most vegetable growers confuse these peppers is often due to their resemblance.

But in the world of green, nothing is as it seems.

They might look identical but are different in heat and flavor profile that works best in various recipes.

Learn also  How to Cut Aloe Vera Plant Without Killing It

So, without further ado, let jump right into it.

While serranos and jalapeno are almost identical in appearance, one of the major differences that distinguish them is Size.

Serrano peppers are usually torpedo-shaped, less rounded than jalapenos with a straight long, and slender shape no longer than 2 inches.

Meanwhile, Jalapenos are the lengthiest of about 2-3 inches with a great crunch and thickness.

My little secret to easily identify the Jalapenos is a simple name: the “fat chili” pepper. I always keep this funny name at the back of my mind so I know they’re chubbier than the serrano when I see one.

Lastly, when planted on nutritious soil during the growing season, Jalapenos can reach approximately 4 inches in length, and about 1-inch in diameter.

WARNING! Banking on their colors is misleading, as both peppers are inconsistent on their journey to ripeness. They display a rainbow of colors depending on ripeness – from green to orange, yellow, red, and even brown – and can be eaten unripe.

Although you can look for tell-tale signs like most seasoned pepper growers do.

While serranos are smooth; Jalapenos peppers often develop tiny white scar across their skin during ripening. It’s known as “corking” – a desirable trait that indicates the pepper is mature and ready for harvest.

Serrano, on the other hand, are heavily packed with seeds – though a few varieties of jalapeno do also, it’s rare.

The most commonly asked question from curious grocery store shoppers is: which is hotter, serrano or jalapeno peppers?

Here is what you need to know about their fire:

Don’t let the slim size of serranos fool you!

Serrano peppers are five times spicier than jalapeños – although their spiciness often depends solely on ripening and direct sunlight.

This is a significant benefit for choosing serrano over jalapenos, as they offer more fire even in small quantities.

While you’re enjoying getting the heat you want, others might consider it too spicy for their meals.

If you don’t have the stomach for the burning sensation, I’d rather you go for Jalapenos – as most people do.

Since Both serranos and jalapenos come from the Capsicum annuum species of pepper, they are quite similar.

They both have a vegetal taste with smoky undertones. They are also sweet, especially when allowed to ripe fully.

While both peppers have a semi-sweet flavor, serrano possesses a sharper, pungent heat with a “delayed fuse”.

A delayed fuse means their heat takes a moment before it fully kicks in after hitting the palate.

So when next you bite into a fresh serrano pepper, wait a moment before taking the second because your tongue might start to tingle sooner than expected.

Which Pepper Should I Grow? 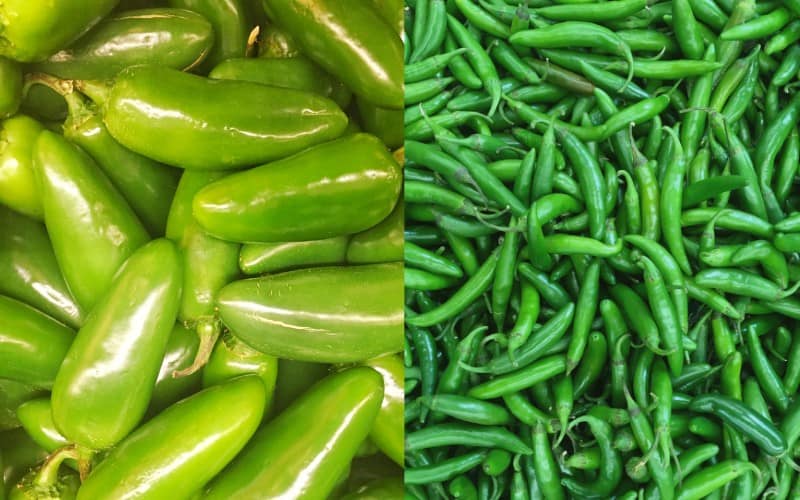 Between these peppers, the jalapeno is more famous and attractive to a wider audience of gardeners than the serrano.

This is because of its larger size and more tolerable heat level. However, if you love the flavor of jalapenos, but want a spicier taste, the serrano would be the perfect pepper to grow.

Learn also  Top 7 Flowers That Start With N (With IMAGES)

In my garden, I always have at least one serrano plant. I love them since their pods are smaller and tend to produce more fruits for harvest.

What Soil Is Best For Jalapenos and Serranos Peppers?

Unfortunately, if your garden isn’t that rich and deep in the soil, you can add about an inch of compost to the top six inches of the soil.

Can I Substitute Jalapenos for Serranos?

Of course, you can use them interchangeably! But have it at the back of your mind that serranos are hotter and not always advisable for use when making stuffed peppers.

However, if you are whipping salsa or guacamole up, either pepper will do.

Everything you’ve read about Serrano pepper vs Jalapeno is not only research-based but also has been tried and tested by our teams (who are spicy and hot sauce avid foodies) that have eaten and planted a fair share of these peppers.

Remember Serranos are definitely not for the faint hearts. I once ate a lot of it (raw) in salad and ended up with red eyes and a running nose.

I should have known jalapeños farewell with even the most reluctant spice eaters and not Serranos. Or since the heat is held in the seeds and inner flesh, I should have removed a few for a less-intense experience.

But it is what it is!