Pansy plant and people seem to have such a cordial relationship. They are easily seen and planted and the reason is not far-fetched. Pansies are quite bright and colorful, and they turn your garden to a palette of colors, especially in the cooler times of the day.

Pansies are not just flowers for aesthetics. One can also eat them since they are edible. They are used to make soups, desserts, and salads, where they also add lots of colors.

But while pansies are appealing and edible for humans, are pansies poisonous to cats? Well, while pansies will not kill your cat, they're not entirely good for cats.

It is common knowledge that cats are quite picky with food. Okay, they are picky with basically everything, but sometimes you can find them smelling and tasting plants.

If you have pansies in your compound, there is a big chance that your cat has gone to check it out. The colors can be quite attractive.

But are pansies poisonous to cats? Here is the thing, if cats ingest pansies, it may not outrightly poison them. However, some side effects may occur when they do.

This is why it is discouraging to have pansies where there is a cat. Anything that isn't in the regular diet of your cat should not be considered safe for them.

Pansies, to cats, are mildly toxic, especially the seeds. Ingesting pansies may cause a few issues with your feline sweetheart. Contact with pansies, particularly the leaves, will cause dermatitis. This will irritate the cat and make her quite uncomfortable.

Not just that, they can cause gastrointestinal upset. This means that your cat would have diarrhea and constant vomiting episodes after ingesting pansies.

How to Prevent Your Cats From Eating Pansies 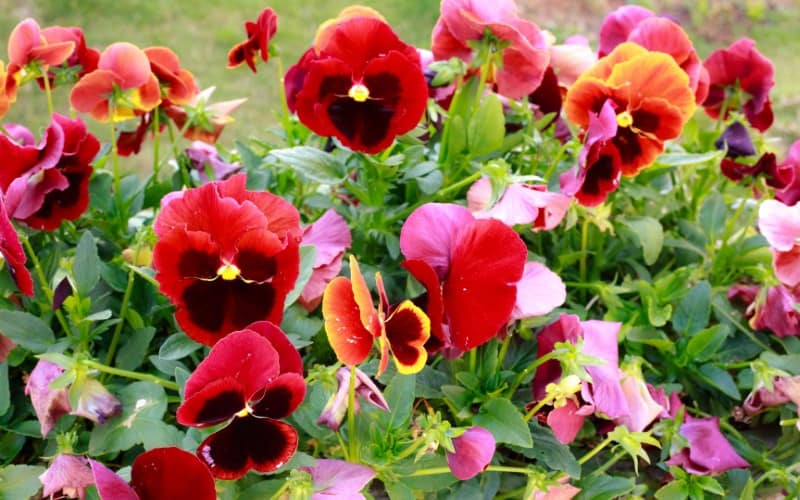 So, do you have a cat and a garden full of pansies? Are you wondering what to do since you now know that cats and pansies aren't exactly a match made in heaven? Here are a few things to do to deter your cat from going close to those dangerous beauties.

Use Cat Repellants on Your Garden

Get one from a garden shop or pet store. The repellants are sold in solid and dry or liquid form. When you spray or drop these near the pansies, the cats would not even go there.

This is because the repellants are made with substances from animals cats dread like bobcats, foxes, and coyotes.

Cayenne pepper has a substance called capsaicin, which is quite a terror to cats. Cats have a sense of smell that is highly developed, and they will catch the pepper's whiff and stay away from the pansies.

This is another thing that does not bode well with cats. Drop the leaves around your pansies, and you will find that the cat will not go near there. You can also make use of tea bags in place of leaves.

Learn also  Will A Palm Tree Die If You Cut the Top Off?

What To Do When Your Cat Ingests Pansies

Just as there is 911 handy for humans, there is the Animal Poison Control Center (ASPCA) number. As a cat owner, you should have their number on speed dial for emergencies. Once you call them, they will take proper care of your feline.

Alternatively, if you notice that your cat is acting strangely, you can quickly take her to any animal clinic around immediately so she can be looked after. Ensure that you are in consultation with a qualified vet.

Are pansies poisonous to cats? There is no united agreement on this. The ASPCA does not include pansies in the list of poisonous plants to cats, whereas some other bodies do. They regard it as being mildly poisonous.

Instead of leaving things to chance and then regretting it when your cat is unwell, it is better to keep the cat from coming in contact with the pansies.

Use the methods listed above to deter the cat from coming near pansies. The adage still holds, "Prevention is better than cure."