Pokeweed (Phytolacca americana) goes by many names, dragon berries, poke sallet, American pokeweed. It is one of the poisonous herbs known to man. But their berries are a source of food, surprisingly to some birds like the brown thrasher and northern mockingbird.

Pokeweed originated from the Eastern part of North America, the Gulf Coast, and the Midwest. Most gardeners treat the pokeweed as a weed, and rightly so.

It has a reputation for growing where it is not wanted; it is also poisonous to man and livestock. People who keep it around use them as ornamental plants.

Due to its toxicity, you should watch out for it and know how to get rid of pokeweed in your garden for the safety of your household.

How to Identify Pokeweed

How do you identify a pokeweed? If you can’t identify the plant, you definitely wouldn't be able to get rid of it. Various names like Pokeroot, Pigeon Berry, Cancer Root, Inkberry Coakun, American Nightshade, Pokan Bush, etc., are identified as pokeweed.

The plant has a Southeastern United States origin but has expanded into other countries due to its invasive nature; for instance, a pokeweed plant can produce as many as 50,000 seeds. Birds and other animals distribute these seeds.

Pokeweeds have long oval leaves and red woody stem. From July to September, the plant grows greenish flowers and grape-like clusters of berries.

The berries or fruits pokeweed have traditional, medicinal purposes, but they can be toxic to humans and animals in the same vein.

How Poisonous Is Pokeweed?

Kids are more susceptible to being poisoned by pokeweed, which is because they are attracted to pokeweed berries. A small amount can be fatal in kids.

It is not only kids that are at risk here. Livestock is too. But most livestock smells their food before eating it. Naturally, they know that it is not suitable for them, and they do not taste it.

How to Get Rid of Pokeweed 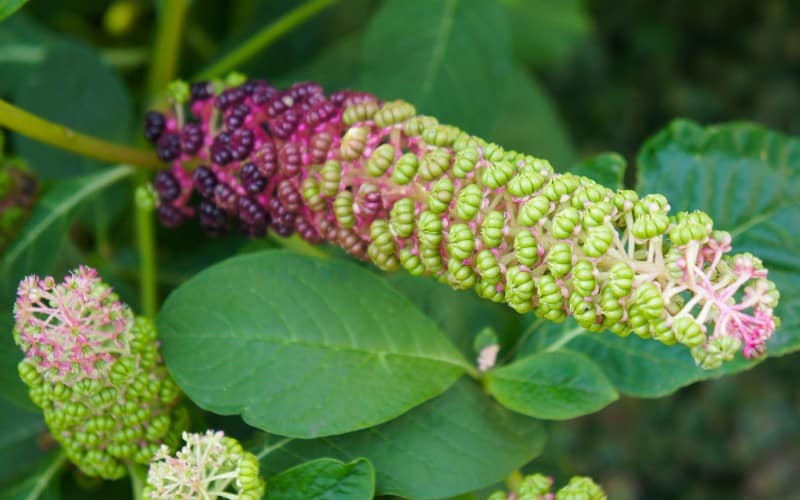 Though pokeweed is a tough plant to get rid of, there are still methods by which you can remove them.

But before you get right into it, you have to get your protective gear-pants, long sleeves, gloves, and goggles for the eyes. These protective gears will protect you from the toxic sap of the pokeweed.

If you have a pokeweed in your garden, remove it as quickly as possible. Why? Because the larger it grows, the stronger the roots become. This will make it too hard to get rid of.

Some of the tools you may be needing are a soil screen, rototiller, rake, shovel, wheelbarrow, and a garbage bag. Here are the next steps if you have the tools above:

1. Pull Out the Roots

Take hold of the shoot near the plant base and then pull it up. Be careful as you uproot them, so they don't break and remain in the ground.

Even the smallest of roots let underground can grow into new plants. The best time to try pulling out the root of the pokeweed is just after rainfall. The rain helps to soften the earth and make your work way more comfortable.

Learn also  How To Pick Rosemary Without Killing The Plant

For you to get rid of the plant, dig around the pokeweed plant, 12 inches across. Dig deep and remove the taproot. Dig until you can no longer see any root.

Leaving a root inside the soil will cause the plant to grow back up again. And if this happens, you have to do all these over again.

3. Dispose of the Plant

When you get out of the plant, place it on cellophane so it will dry out. As soon as it dies, set it inside the garbage, and throw it away.

Uprooting it and then dumping it on a garbage pile may result in the plant growing again. Hence it must remain in the cellophane.

Get a rototiller to dig around the soil to check if there are still roots remaining that need to be removed and gotten rid of.

5. Get Rid of Berries and Fruits

Check thoroughly and make sure nothing toxic is still hiding in the soil. There is an emphasis on this because the berries and fruits are poisonous to man and animals.

Check also for another growth in the ground and uproot it. If there is new growth, you will have to redo the process. When you have gotten rid of the pokeweed, plant something beneficial there.

How to Kill Pokeweed Plant Fast

Suppose killing pokeweed mechanically doesn't work. You can try another means of destroying the pokeweed.

Any weed killer that exits is suitable and can kill the pokeweed. If the regulars did not work, you have to use glyphosate herbicide (2% solution). Apply the herbicide to the plant thoroughly. After 10 days, pull off the plant.

Pokeweed can be hard to exterminate, so do not assume that trying the methods listed above once will do the trick. You have to keep trying over and over till the deed is done.

Is Pokeweed Poisonous to Touch?

Pokeweed is poisonous to touch and can cause pokeweed rash on some people. The inflammation is quite similar to the poison ivy rash. Contact with pokeweed sap can cause a blister-like itchy rash, so it's best to put on protective gears when handling the plant.

Wash your hand thoroughly after handling pokeweed. Also, wash the clothes worn when handling the plant to remove any sap that may contact the fabrics.

Although, pokeweed isn’t considered to be a broad skin allergen like poison ivy. But some people are sensitive to the plant and have reported having rashes after coming in contact with pokeweed.

To be on the safe side, you should wear protective clothing when handling pokeweed to keep the plant from rubbing up against your skin. Calamine lotion can be used in treating pokeweed rash, but if any further symptoms develop, contact your doctor immediately.

If you eat pokeweed, the first sign you will notice is a burning feeling in your mouth. It might also cause diarrhea, vomiting, and cramps. In severe cases, it may cause respiratory failure, convulsions, and then death.

When the sap of the weed touches your skin, you will have rashes. The name of this rash is the pokeweed rash. To avoid getting the sap on the skin, it is advised to wear long sleeves and hand gloves.

As soon as you are done, pull out all your clothes and wash them using a strong detergent. Take your bath too. If you see any rash forming, use calamine lotion to treat it.

Is Pokeweed Poisonous to Dogs?

Your dog might experience gastrointestinal upset and respiratory issues. In severe cases, ingestion of the plant might cause the death of your dog. To combat these effects, your dog might require fluid therapy, gastric lavage, and even a blood transfusion.

If your suspect that your dog has ingested pokeweed, visit the veterinary as soon as possible. Do not wait for symptoms of toxicity to appear before seeing the doctor.

There are some symptoms your dog will exhibit that may suggest that your dog has ingested the poisonous pokeweed. They include:

Note that your dog might not exhibit all these symptoms at once as the severity of the symptoms will vary from case to case.

It is in your best interest if you know how to get rid of pokeweed because the plant is a nightmare for every gardener, and you too should be concerned. Pokeweed is an invasive plant; it will overrun your garden and compete for nutrients with the park's original plants.

If you notice a pokeweed plant in the garden, you have to be extra careful. First, ensure that kids and pets, and livestock do not come near the garden.

Once you have successfully warded them off, you can then use the method that we listed above. Remember to put on protective clothing when dealing with the weed. And even if you don't get the required result at first, try again.