Beetles and cockroaches are pests that all homeowners and gardeners won't want to find in their homes and garden. More so, you don't want a house guest sighting a beetle or cockroach in your home. These insects come with a large number of diseases.

Now it’s quite common for you to confuse a beetle with a cockroach and vice versa – that’s why this post will center on beetles that look like cockroaches.

For instance, ground beetles and June bugs share so many similarities with cockroaches and are often mistaken for cockroaches.

Knowing the proper difference between them will help you adopt the best pest control measures to get rid of them. This post will provide sufficient information on how to identify these pests and eradicate them.

How To Identify a Beetle

There are over 400,000 different species of beetles with ranges in size. Beetles are colorful insects that come in vibrant colors.

Most beetles possess two sets of wings. Beetles have stiff outer sets used to protect the inside wings, which are used for flying. Ground beetles have some similarities with cockroaches, although they have smaller heads.

Learn also  How Long Can You Store Rainwater for Plants?

The most common type of beetle you will find in a household are:

Other types of beetles are:

There are over 3,500 identified species of cockroaches; roughly 10 of those are considered household pests.

Cockroaches have papery, leather texture shell that looks like hard shells on the back of their bodies. Cockroaches have 6 long legs and a long antenna. Most cockroaches are reddish brown and dark brown.

We know that a cockroach body can be broken up into 3 different sections; the head, thorax, and abdomen, from biology class drawings.

In some large cockroach species, the males possess a double set of wings while the females do not have wings.

Cockroaches have a high tolerant rate and can source food practically anywhere. They are considered omnivore animals because they eat everything ranging from meats, sweets and starches, skin, hair, paper, etc. Basically, nothing is off-limits to a cockroach. 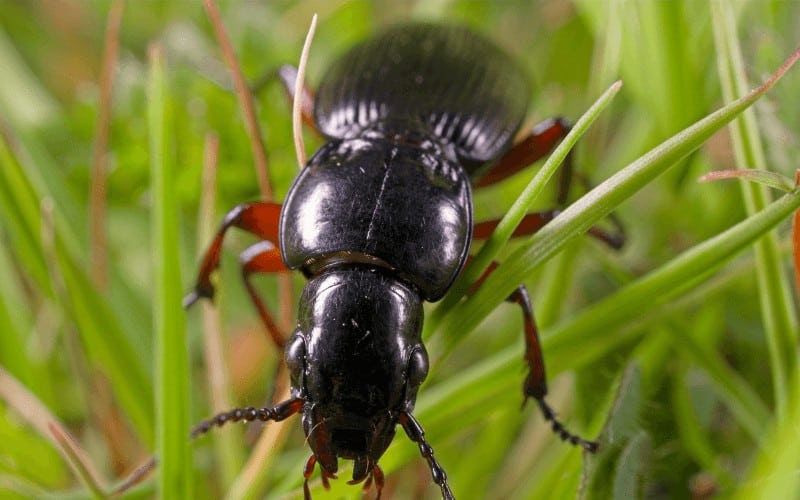 An insect scurrying across your floor will leave you at a crossword. You may be able to narrow down the insect to a cockroach or beetle.

Most often than not, ground beetles are commonly mistaken for cockroaches because both insects share certain similarities.

Ground beetles look like cockroaches with their shelled segmented body and antennae similar to that of a cockroach.

Ground beetles are mostly found under stumps, trees, piles of leaves, and stones. These beetles are attracted to light and will stay on your porch if the light is on.

Unlike cockroaches, ground beetles are considered harmless, but it's best to eradicate the insects.

Since ground beetles are attracted to light, purchasing a less attractive light bulb such as a halogen bulb or a yellow insect bulb will help keep insects away from your doors.

Damages Caused by Beetles and Cockroaches

As mentioned earlier, cockroaches and beetles are pests of destruction. Cockroaches spread diseases and contaminate your food.

The contamination can result in severe food poisoning. Cockroaches can comfortably harbor bacteria like salmonella, staphylococcus, and the poliovirus.

Apart from causing and harboring diseases, cockroaches are pretty destructive. The pests can destroy your high school certificate under a twinkle of an eye.

Cereals, paper products, and wallpaper are attractive to cockroaches since the pest feeds on anything.

It's common to find cockroaches roaming in your kitchen in the middle of the night; they are nocturnal pests. They leave their musty odor behind and feces that resemble coffee grounds after a night of rampage.

Beetles are also as destructive as cockroaches, if not more. The larvae of a beetle can live for a long time and can be found at home, inside sheds, wood, or carpet.

Beetles can feed through anything like leather, carpet, any cloth, and even dead organisms. Beetles are also plant pests and can invade your plants if you don't take steps to get rid of them.

Getting Rid of Cockroaches and Beetles 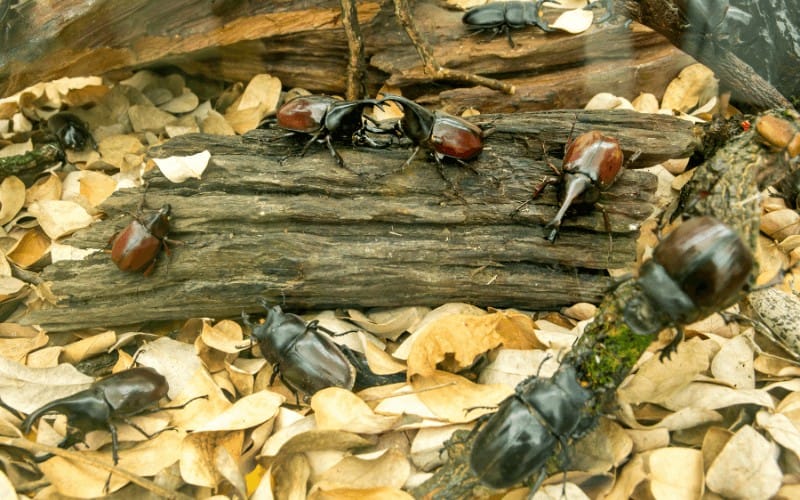 The best way to get rid of cockroaches and beetles from your home is by taking away their food supply and water source.

Keeping in mind that cockroaches and beetles thrive in dirty environments, you will need to take extra care in keeping the house clean.

Beetles and cockroaches are omnivores which means that they can practically feed on anything they come across.

You will have to take extra steps such as storing pantry food in airtight containers and clean out your trash can regularly to get rid of them.

A little crack in the window or door is all the pests need to get inside your home. To prevent them from coming in, regularly check the wall or opening for any crack which the insect can use to gain entrance.

Natural repellents, like bay leaves, cucumber slices, and garlic have been used to rid areas of cockroaches.

It's common to mistake some beetles for cockroaches. But whether beetle or cockroaches, you need to take further steps to eradicate the pests from your home!

Beetles that look like cockroaches are common, especially for the ground beetle that moves as fast as cockroaches with its small body and extended antenna.

Knowing the right insect will help you in getting rid of them. If the infestation of cockroaches and beetles is beyond your control, then it may be time to seek the help of a professional exterminator.