Having your home, basements, office space, stores, closets, or garden infested with roaches or bugs can be awful, especially since they are humans who cannot stand these insects and result in suffering traumas or phobic attacks.

When ingested into the human system, these roaches secrete fluids, turn to be dangerous, and pose a health hazard. And when in your garden, they tend to disturb your crops.

If you might have difficulty differentiating between other bugs and cockroaches; then you are in the right place!

Read on to know more about creepy insects lurking around your corners and how to differentiate among the various bugs found in your home.

How To Identify A Cockroach

Before differentiating between a cockroach and other bugs, you must know how to identify a cockroach. This will help you distinguish among the various insects that share some similarities.

A trip down our biology class in high school will have use armed with the information that a cockroach is a true insect with a head, thorax, and abdomen. The pest has a pair of folded wings along its back and a very flat body that makes it hard to squish.

Most adult cockroaches can fly but prefer to walk from place to place, although they move quickly. Another unique feature is that a cockroach has a long pair of antennae that stretch from the head to the opposite end of the cockroach.

Cockroaches are mostly brown or black, although in some rare cases, we have white cockroaches.

Cockroaches are omnivores and, in turn, eat almost every type of food. They prefer meat, sugars, and carbohydrates so that a barbecue would be an absolute paradise. 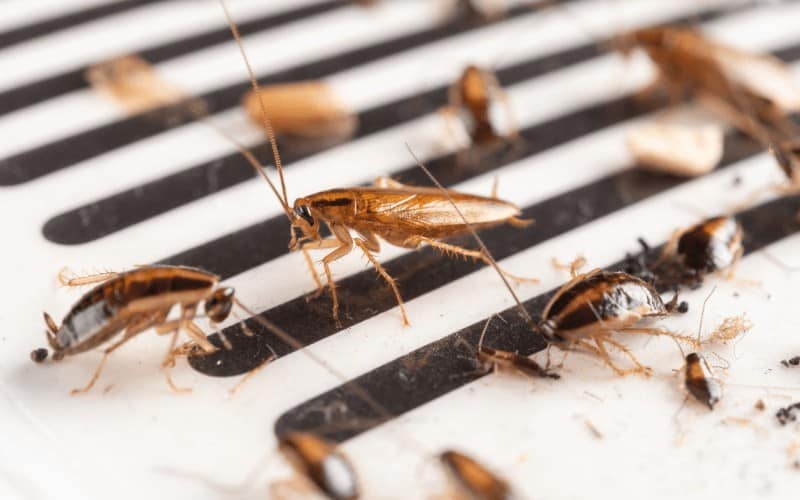 You definitely can’t keep track of the various cockroaches species; there are over 4,800 species of cockroaches worldwide.

The most common species of cockroaches we find in our homes are American, German, and Hissing cockroaches. Below is a brief description of these cockroaches:

American cockroaches are one of the largest species in existence and can be found around the world.

The cockroach has a reddish or dark brown body and a yellow or pale brown band at the edge of the pronotum. American cockroaches are found in warmer climates and spread diseases that are threats to humans.

German cockroaches are the most common types of cockroaches and are mostly found in warmer climates and not just in German, as the name suggests.

The cockroaches tend to be brown and have dark bands which run across the pronotum. German cockroaches are the biggest carrier of diseases and contaminate food causing severe problems.

The Madagascar Hissing Cockroach is not usually found in households unless in severe cases. The cockroaches have brown bodies and make the characteristic hissing sound that gave them the name 'hissing cockroach.'

Identifying cockroaches and other bugs might be quite difficult for you since they are so familiar. Differentiating between these pests will go a long way in eliminating them from your garden and home.

Crickets are roughly the size of cockroaches, but their coloring is a lot darker than the roaches. Most of them appear all black.

These pests also make a unique, lasting tweeting noise, in contrast to the quiet roaches.

Giant water bugs are often confused with cockroaches, coupled with the fact that in some sectors, roaches are wrongly named water bugs.

However, though water bugs share identical size and coloring with cockroaches, they are distinct.

Crucial differences include habitat and size: water bugs live in water sources and can measure a full inch, while the roaches prefer dark sewers and are usually small in size.

These beetles are typically no larger than one inch in length and vary in color from reddish-brown to almost black.

When flying, they often run into windows and can be found clinging to screens. Their backs are higher and more rounded than a cockroach's, and their overall appearance is stockier.

Curiously, these bugs are sometimes confused with cockroaches, as they have their distinctive look. Coloring is black with prominent, irregular white spots. Their extremely long antenna curl back and can appear .to encircle the body completely.

How to Differentiate Between Cockroaches and Other Bugs 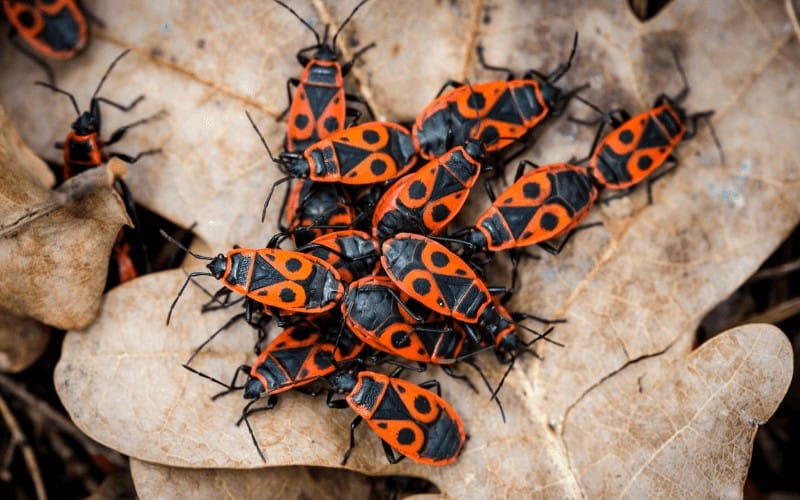 Telling cockroaches apart from other bugs might not precisely be easy unless you know what to look for. Insects like crickets and beetles are often mistaken for roaches.

The list below will go a long way in helping you spot out unique differences between cockroaches and other bugs.

Learn also  Will Mothballs Keep Squirrels Out Of Flower Pots?

Beetles have a hard exoskeleton and give a definite "crunch" when squashed. Crickets are shaped like grasshoppers, with powerful back legs for jumping.

Roaches are reddish-brown to black. Some roaches are a single brown color, and some have more than one shade and specific markings.

The American cockroach has reddish-brown wings and light-colored circular or "figure eight" markings on its midsection (thorax). It also has a light-colored band just below its head.

The German cockroach is light brown, with two stripes just below its head. The smoky brown cockroach is dark mahogany brown all over.

There are more than 300,000 species of beetles, and they come in various shapes, sizes, and colors.

Many beetles are brown, which increases their resemblance to cockroaches. The ground beetle and the June bug are two harmless beetles often mistaken for roaches.

Crickets are varied from brown to black.

Most cockroaches have wings that lie flat against their backs and are always visible, but not all. Beetles may or may not have wings.

When a winged beetle is at rest, its wings fold up under hard wing cases, part of the beetle's exoskeleton. Crickets’ wings extend over their abdomens. Not every cricket species has wings.

Crickets, like grasshoppers, can hop enormous distances. A stunned cockroach may "hop," but running is their best escape.

Beetles are also known to scramble, while some species are exceptional swimmers.

Cockroaches are attracted to water, but they inhabit on land. Cockroaches live in and around your home.

Crickets are mostly outdoor bugs that would immigrate to the houses under conducive conditions. Crickets and some beetles are enticed to light. Cockroaches crave dim light and darkness.

Cockroaches metamorphose from eggs. They appear identical to adult roaches from the time that they hatch.

Beetles startup life as a worm (grub) and later morph into the adult bug. Crickets also concoct from eggs, and, like cockroaches, the nymphs look similar to the adults.

Distinct beetles and crickets can be very hazardous to wood, fabric, and plant crops, while some species of beetles are predators.

Beetles have vital mouthparts, and some may bite. Cockroaches aren't perceived to bite humans except in rare situations, but they can still be poisonous to humans.

Roaches pass through sewers and filth and transmit germs across your food and belongings. Some people are allergic to the feces and fluids secreted by cockroaches and bugs.

Some wood bugs are sometimes mistaken as roaches. It doesn’t help that some wood cockroach use like the typical American cockroach.

Both wood cockroaches and American roaches have certain similarities like chestnut coloration, an oval shape, long antennae, and six legs. The only difference being that wood cockroaches are usually bigger in size.

Having a problem with bugs that look like roaches is just as bad as having an actual cockroach problem.

There are different market pesticides for pest control. One should be on the lookout for the most suitable product to get rid of these pests.

Bugs that look like cockroaches but aren't can be gotten rid of regardless.