Anyone who spends time in a garden knows that worms are more than just fish bait, they are an essential element that contributes to the success of any healthy garden.

And without them (or much of it), farmland would not be as nearly as productive, even when using the most effective fertilizers.

However, I have noticed that most gardeners find it quite challenging to choose between Compost worms vs earthworms – the one they should encourage in their garden.

The major difference between earthworms and compost warms is that earthworms are burrowing, segmented worms that are vital for aerating and draining the soil, while compost worms are red wiggler worms used in vermicomposting.

In today's article, you are going to learn other differences between these warms, their similarities, and which one your thriving garden REALLY needs.

What Is Compost Worm And Its Benefit?

Worm composting also known as vermicomposting is the use of worms to recycle kitchen scraps and other organic materials into valuable soil nutrients. This helps reduce on third of your household trash.

Placid red wiggler will eat these food scraps and when excreted, it turns into nutrient-rich compost which can be taken in and used by plants.

Mostly, redworms and Red wigglers are the organisms ideal for worm composting, which is done in a bin.

On the contrary, Earthworms aren’t a good choice, as they are diggers and will try to get out.

Aside from that, worm compost increases beneficial microbes that can help suppress plant diseases and resist insect attacks.

What Is Earthworm And Its Benefit 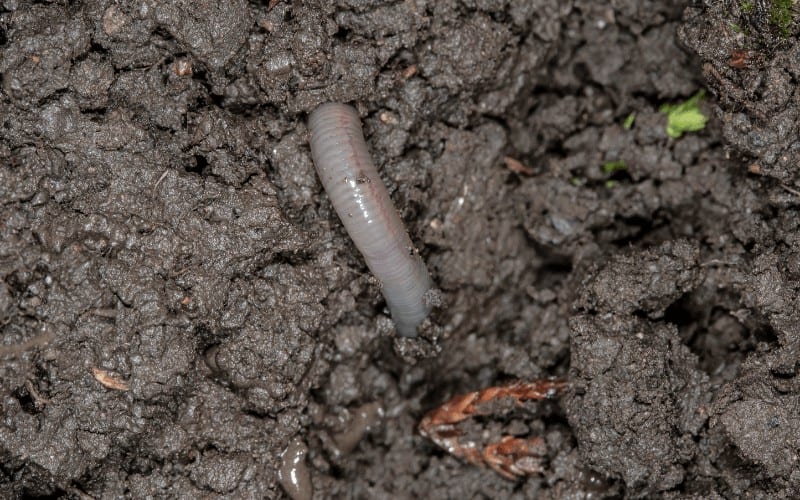 Earthworms, on the other hand, are burrowing annelid that lives in the soil. They perform mainly three activities that offer a wealth of benefits to our garden. And they are:

Earthworms feed on both organic matter as well as small microorganisms. And when excreted, their cast is rich in nitrogen, potassium, and phosphorous which are often the key minerals our plants need to grow.

And these casting yield benefits far beyond what fertilizer ratios show.

If you’ve been around a farm in spring, you notice most farmers plow the soil before sowing seed, so air and water can get the roots of the plants.

However, earthworms act like tiny plows in our garden soil.

Their extensively channeling and burrowing helps loosens and aerates the soil, allowing oxygen, water, as well as aerobic bacteria to EASILY get to the plant’s roots.

When earthworms leave their casts on the soil surface they rebuild topsoil. These cast cement soil particles together in water-stable aggregates, which stores moisture without dispersing.

Similarities Between Compost Worms And Earthworms 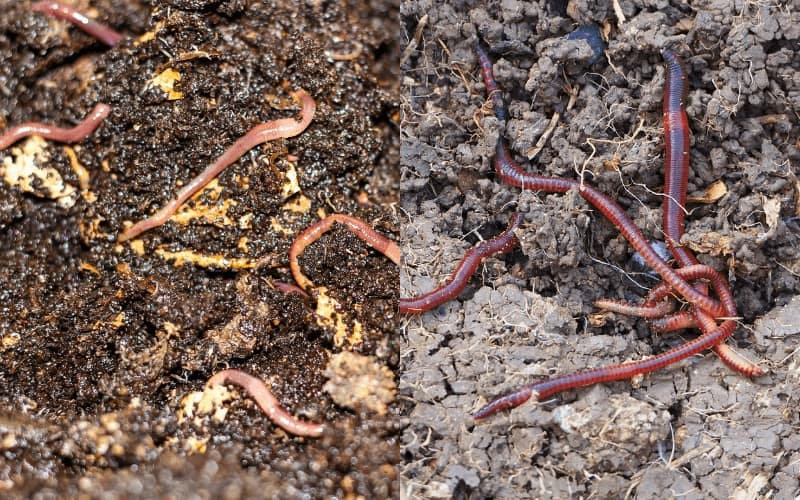 Below we’ll look into the visually identifiable differences between these worms such as their color, shape, feeding habits, and more.

It is a brainer you can tell the difference between a tiger and a lion even at a fleeting glimpse.

But you can say the same for leopard and jaguar – and that is how earthworms and red wigglers are. Even to the trained eye, these two species of worms can be tough to tell apart.

But you can judge them by their colors and length.

An Earthworm’s body is called a cuticle. And it is usually soft, permeable, and reddish-brown.

In terms of length, different earthworm species can vary from an inch to about 6 inches. But researchers claimed to have seen a 22-foot-long earthworm in South Africa –so I heard!

Compost worm, on the other hand,  A.K.A Red wiggler worms measures between 2 and 3 inches long and are slightly reddish-purple.

The single red or yellowish blemishes at the tips of their tails is a piece of concrete evidence that it is indeed a red wiggler worm – in most cases though.

Learn also  Potting Soil Vs Topsoil For Grass | Which Is The Best?

Earthworms take off dead organic matter from the surface of the soil to the underground – that is why they are burrowers.

Meanwhile, compost worms carry their feeding material onto the surface of the soil, and therefore, they are surface dwellers. On top of that, red wigglers are more aggressive when feeding than earthworms.

As for their ideal worm conditions, red wigglers thrives in warm temperature like in a compost bin. They are adaptable and can tolerate temperatures from 32°F up to 95°F.

Earthworms can’t survive in compost piles as red wrigglers do. They are only ideal for outdoor gardens and are often found in your backyard as well as flower beds because they require moist soil for survival.

If the surface becomes unbearable dry and cold, they will burrow deeper into the ground.

The speed of reproduction of an earthworm is incomparable to that of a compost worm. Red wigglers are heavy breeders.

At this juncture, I believe you must have known the difference between Compost worm vs earthworms.

Both worm farming has the propensity to supplies your tasty thin veggies with the necessities to hulk up.

But you should have at the back of your mind that the main distinction between Compost worms vs earthworms is that compost worms are red wiggler worms used in vermicomposting. Whereas, earthworms are burrowing, segmented worms that are vital for aerating and draining the soil.