There are so many flowers that start with A. Most of them can only be found in specific geographical areas, while a good number of them can be planted in any region.

More so, these flowers have special nutrients that are exploited for various purposes.

Virtually everyone living on earth has favorite flowers. But there are lots of them you may have never heard of.

Here’s a list of the top 28 flowers which names start with the letter “A.”

Flowers That Start With A 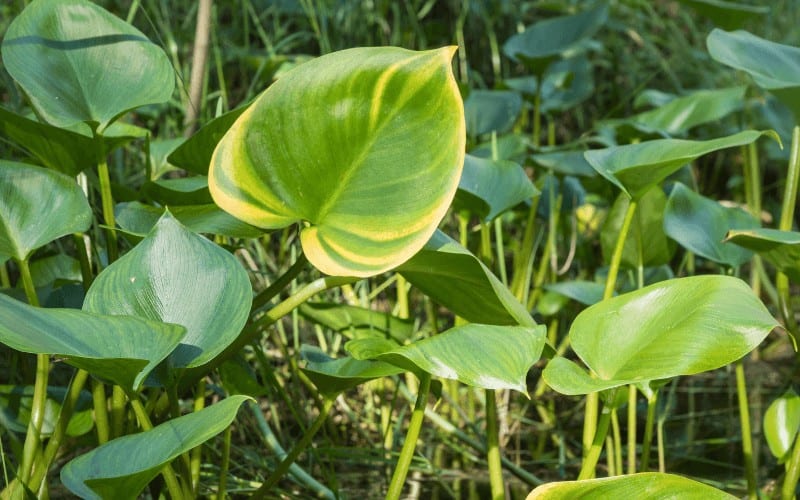 Typically found in Europe, N.Africa, Western Asia, and Central Asia, Arum (a.k.a Arum Lilies) is a genus of flowering plants with the highest species diversity, having about 32 unique species in the family Araceae.

Its plants are characterized by their unique flower structures, with several of them having arrow-shaped leaves. 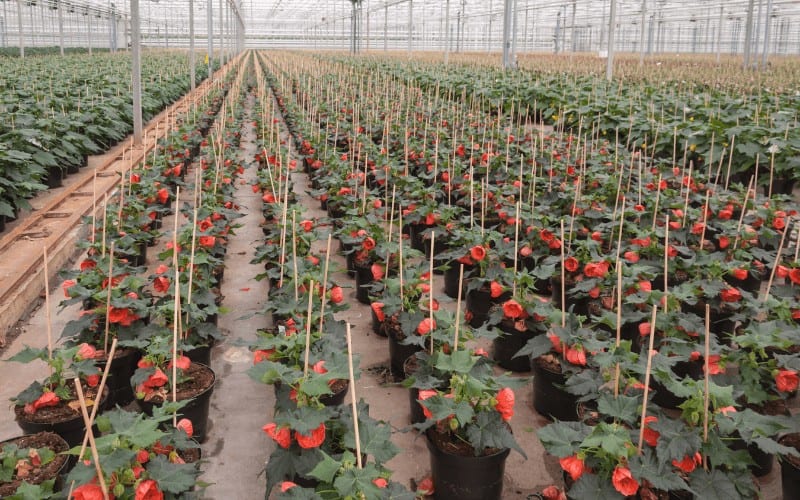 Abutilon (commonly called Flowering Maple due to its leaves structure) has over 100 species of nonwoody plants and partly woody shrubs in the mallow family, Malvaceae.

It is usually seen in tropical and warm temperate areas. Various species of Abutilon are uses as houseplants and for gardening.

This genus of flowering plant is distributed through the tropics and subtropics of Africa, America, Australia, and Asia. 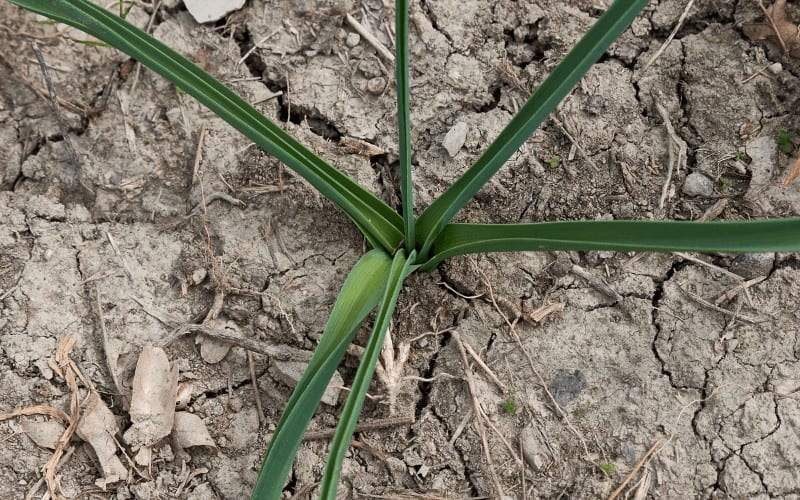 Anthericum is a genus flowering plant with about 65 species in the family Asparagaceae, subfamily Agavoideae.

Typically, the species of this flowering plant have long narrow leaves, rhizomatous or tuberous roots, and branched stems that carry starry white flowers.

This genus can be seen in tropical America, Europe (Mediterranean area), and N. Africa. 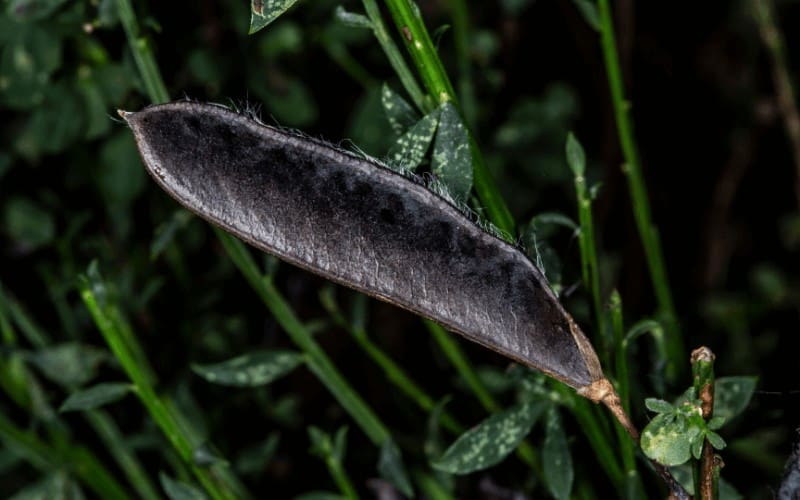 Also known as acacia, mimosa, thorn-tree, or wattle, this flowering plant - Acacias - is a polyphyletic genus in the Fabaceae family, subfamily Mimosoideae.

Acacias flowers are typically soft, yellowish, and tend to be fluffy. They are best nurtured in sheltered gardens. The flowers can grow up to 7ft high and blossoms in early spring. 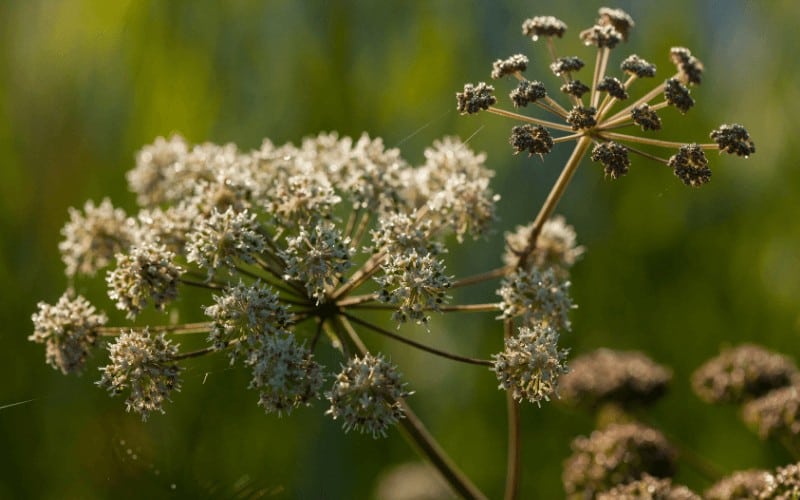 Angelica species are typically used in preparing traditional medicines. This genus flowering plant has about 60 species of tall biennial and perennial herbs in its family, Apiaceae.

The species can grow up to 9ft tall, featuring large bipinnate leaves, which are usually whitish or greenish. 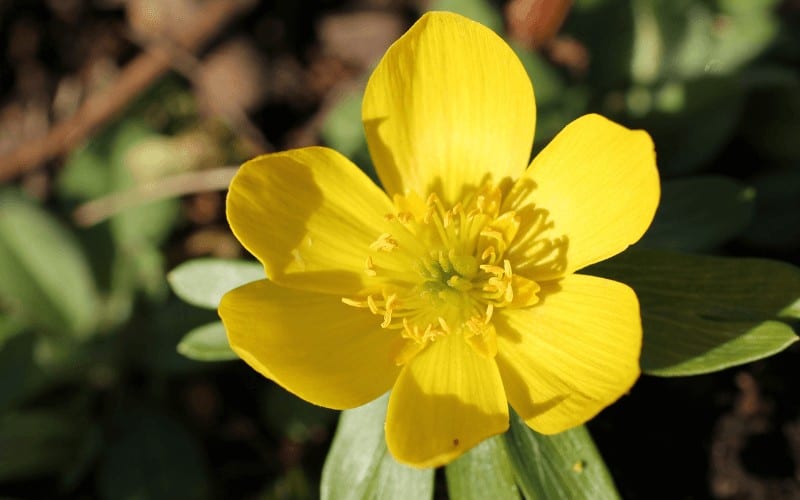 Aconite (a.k.a Aconitum) has over 250 species - the highest species diversity in its family, Ranunculaceae.

This flower is also called mousebane, monkshood, leopard's bane, devil's helmet, women's bane, queen of poisons, etc. It has many nicknames and the plant is poisonous.

You’ll mostly see Aconite flowers in mountainous areas. The scapes grow tall, up to 4ft high or even higher. 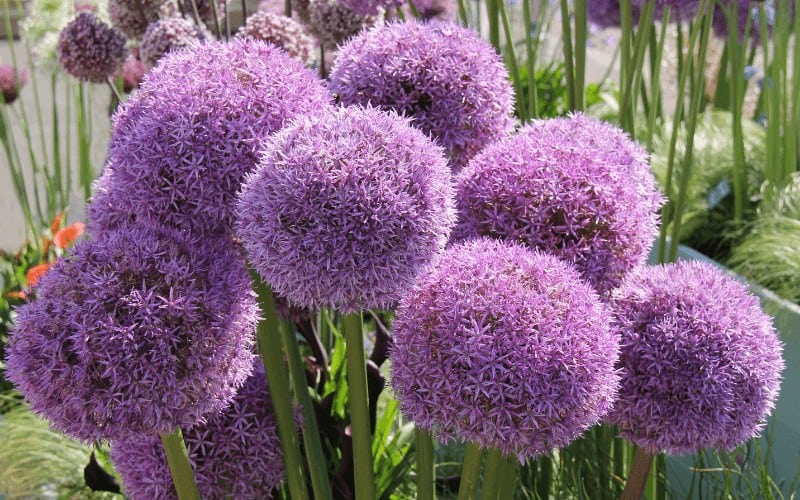 Allium is a genus of monocotyledonous flowering plants. It has several species, which include popular flower plants such as cultivated onion, scallion, leek, shallot, and chives.

Actually, the name Allium is generic, it interprets as as “Garlic” in Latin. This plant usually grows from a bulb or seed to produce globes of purple flower clusters at the of long stems. 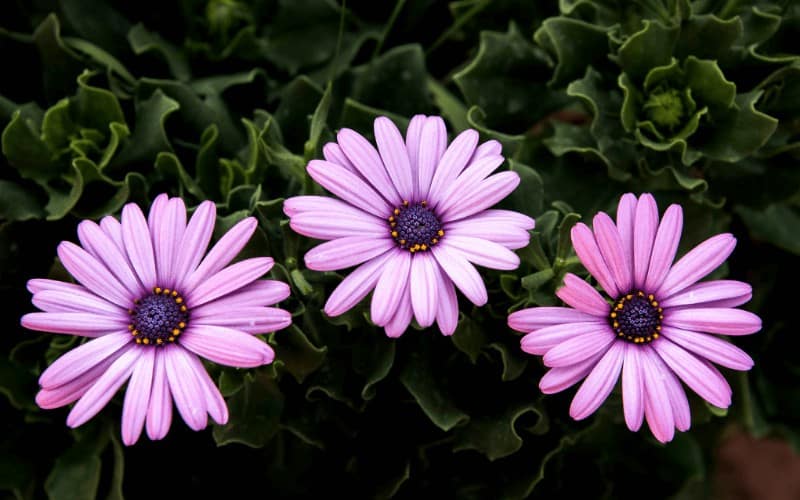 As the name implies, this flowering plant originates from Africa. It is a genus plant with diverse species in the family Asteraceae.

African Daisy belongs to Calenduleae - a small tribe of the sunflower/daisy family, Asteraceae. It is also called daisybushes or African daisies. 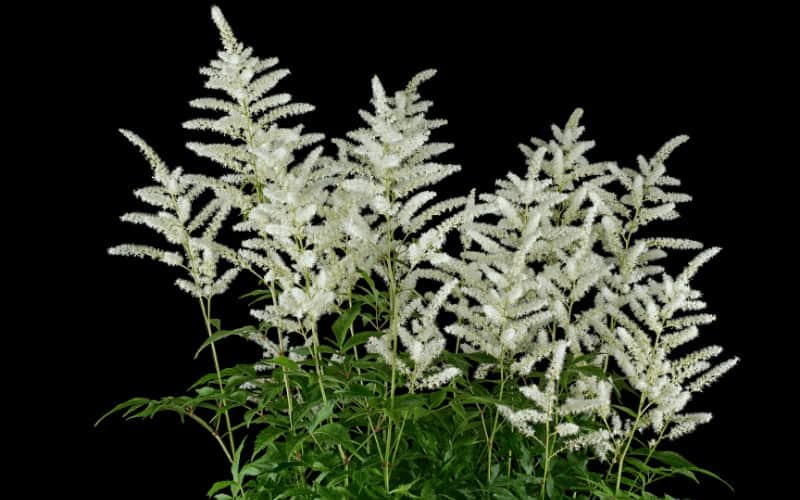 Astilbe has just 18 species of flowering plants. Its plants have showy flowers that add more beauty to your gardens.

This genus belongs to the Saxifragaceae family - it is usually found in mountain ravines and woodlands in Asia and N.America.

The clusters grow up to 2 feet, with a height ranging from 6 inches to 5 feet, depending on the species. 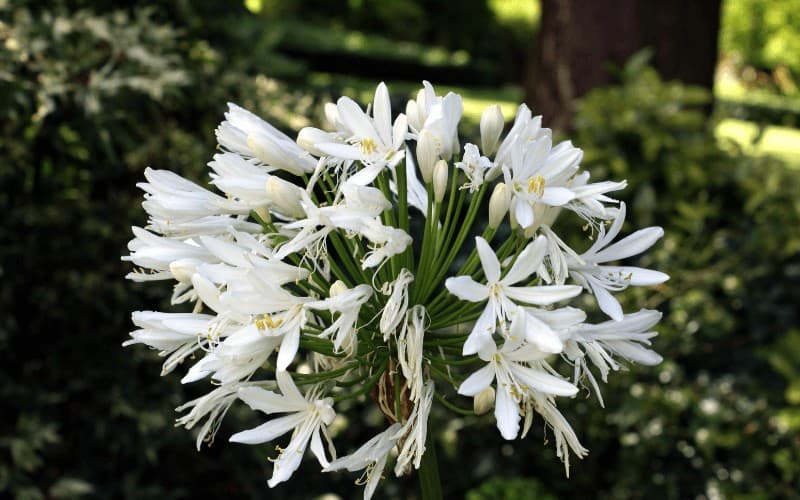 Agapanthus is the only genus in the Amaryllidaceae’s subfamily, Agapanthoideae. It is a monocot flowering plant, named from the Greek words, ἀγάπη, ἄνθος.

Some Agapanthus species are lily of the Nile, or African lily (as known in the UK). 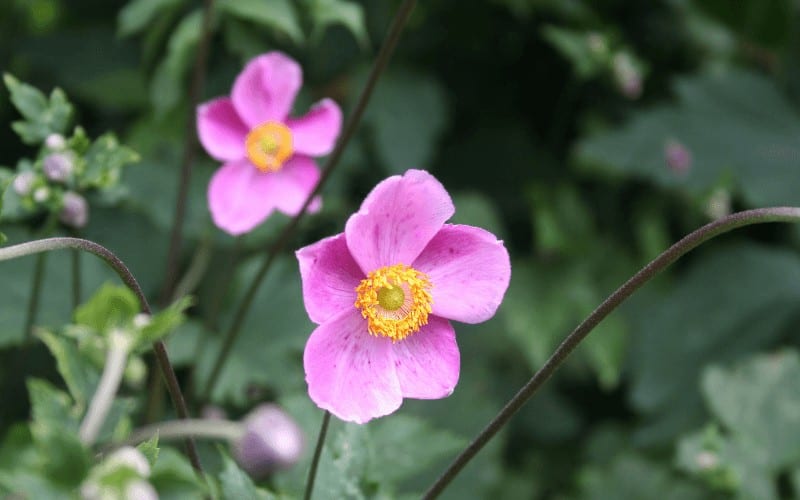 Anemone, a.k.a windflower is a genus of tuberous flowers that produce poppy-like blooms in the spring season.

As perennials, anemone flowers grow back yearly if properly taken care of. 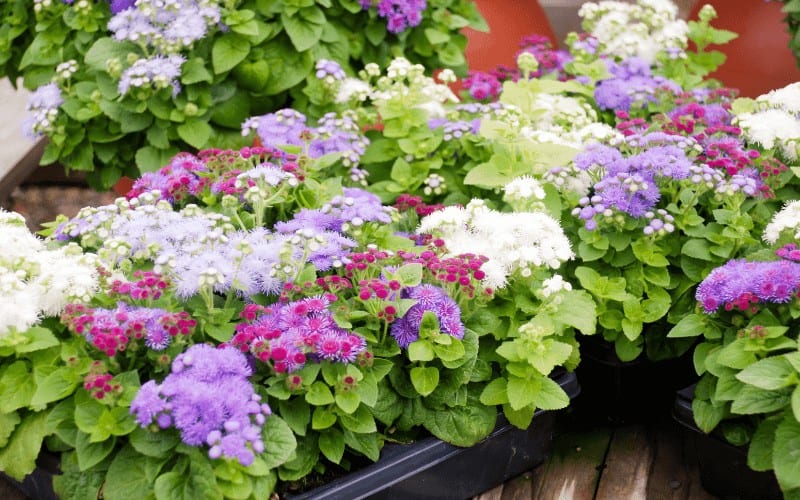 Mostly, Ageratum is grown by people living in Central America and Mexico due to its whimsical pompom-shaped colorful flowers, usually in shades of blue, pink, white, lavender, and red.

The flowers also appear in bicolor. Ageratum flowers can grow up to 30 inches in height. It is a genus from the Asteraceae family and boasts of 40 to 60 tropical and warm temperate flowering annuals and perennials. 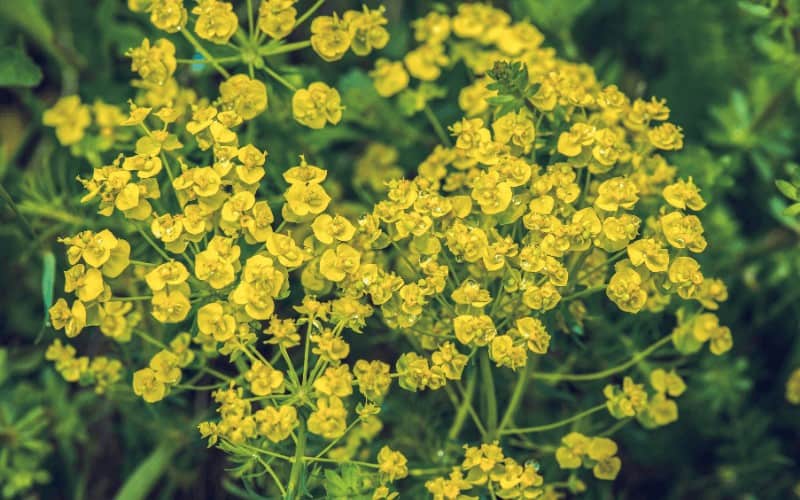 Alyssum is a genus of about 170 species of flowering plants in the Brassicaceae family. It is usually found in Europe, Asia, and A. Africa.

It is one of the plants that have the highest species diversity in the Mediterranean area. This genus has a popular species variant called Lobularia maritima (commonly called Sweet Alyssum). 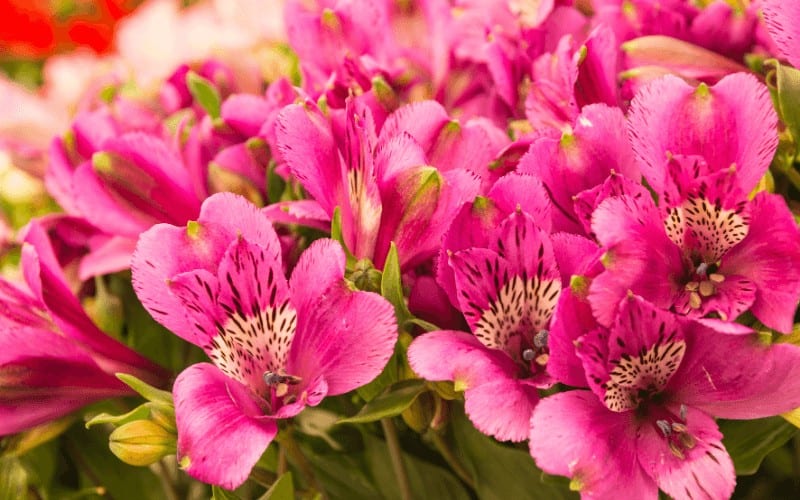 Alstroemeria (a.k.a Peruvian lily or Lily of the Incas) belongs to the family Alstroemeriaceae. It is found in S.America, Mexico, New Zealand, Madeira, Australia, and the Canary Islands.

The spikes can be up to 24 inches high, and its species produce different beautiful colors, including orange, cream, and red. Sometimes, the leaves may have spots of other colors, too. 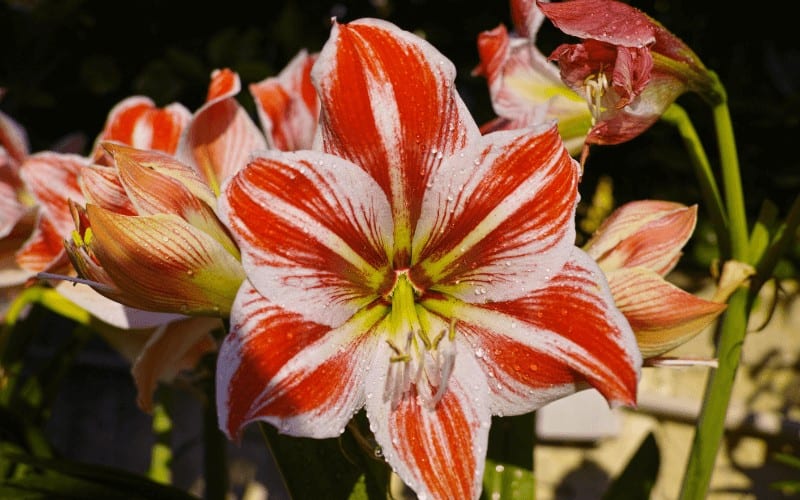 Amaryllis is a small genus in the subtribe Amaryllidinae - a genus of flowering bulbs - and it has just two popular species.

One of the species, Amaryllis belladonna, is known from Western Cape, South Africa, particularly the rocky southwest area between the Olifants River Valley and Knysna. 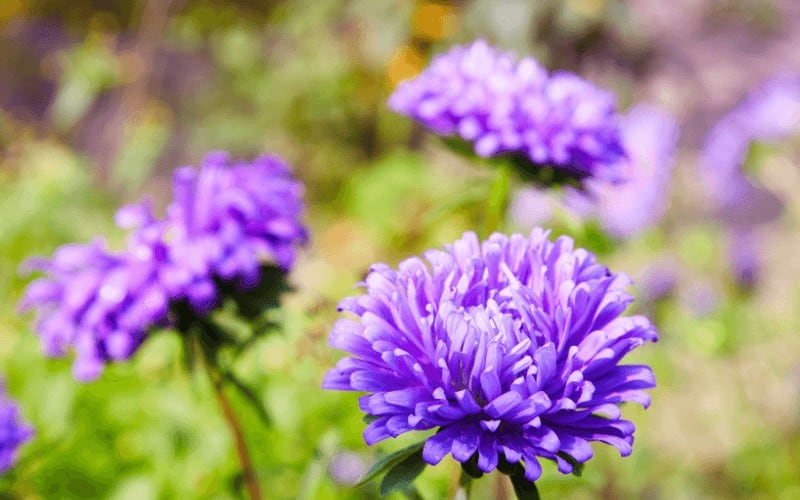 Aster belongs to the family, Asteraceae, it is is a genus of perennial flowering plants, having over 170 species.

However, most species of Aster are now in other genera of the tribe, Astereae. The plants produce different colorful flowers and grow up to 6 feet high. 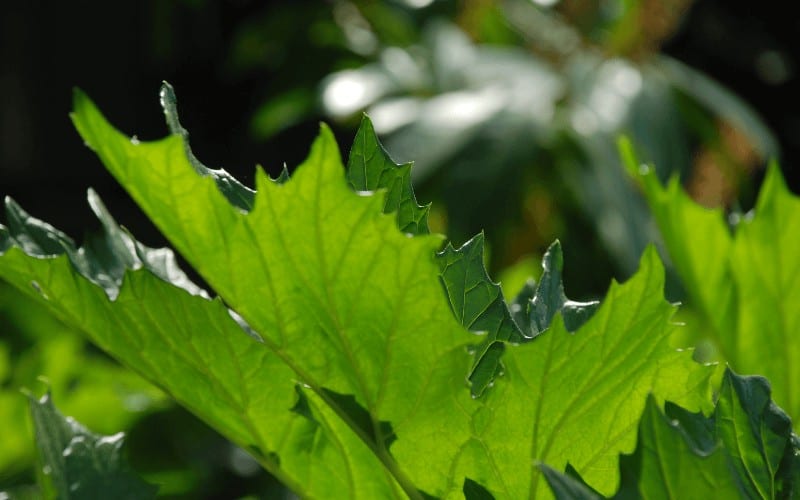 Acanthus is a genus of about 30 species of flowering plants, usually seen in tropical and warm temperate regions.

The genus belongs to the Acanthaceae family, and it has the highest species diversity in the Mediterranean Basin and Asia. This flowering plant produces beautiful colors that would spike your garden’s beauty. 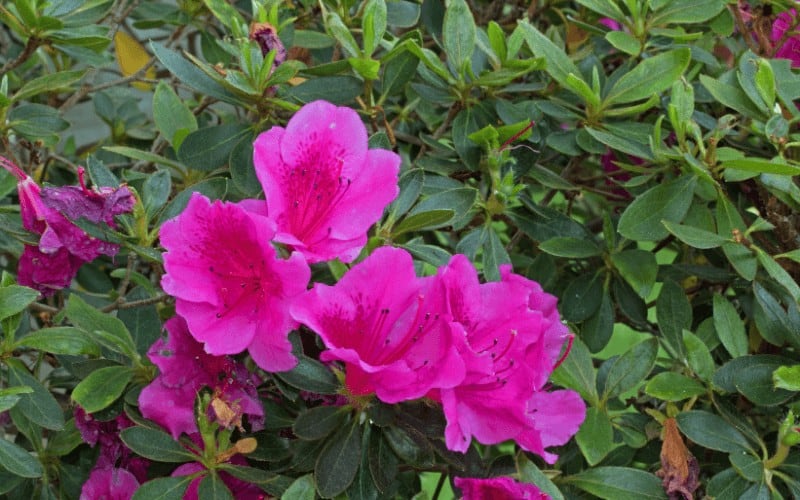 Azalea shrubs look very beautiful when properly taken of; Azalea is a genus of flowering shrubs that bloom in the spring.

Its flowers typically last for several weeks; however, the plant is shade tolerant - prefer to be grown near or under trees. This genus belongs to the family, Ericaceae.

There are basically hundreds of flowers that start with a, the 18 we've listed here are just part of them. We will continue to update the list with more flowers with time.

Now, which among the ones here is your favorite? We'd love to hear what you think!