Cucumbers are easy to care for vegetables that require adequate sunlight and plenty of water to thrive. Determining how much water a cucumber plant needs per day goes beyond reading instructions written on the seed plants.

When it comes to how often to water cucumbers, cucumber plants need at least 1 inch of water per day; however, the amount of water depends on a variety of factors, such as local climate, the quality of soil, and the method of irrigation adopted.

These factors would be looked into, to help you determine how much water your cucumber plant needs per day or per week as the case may be.

How Often Do You Water Cucumber Plants?

How often your cucumber plants need to be watered depends on the following factors:

1. Quality of the soil

The type of soil a cucumber plant is grown in, and the quality of the soil it is grown determines how often it should be watered. Optimum garden soil is one that is rich in nutrients and adequately drained.

Sandy soils drain quickly, and as a result, they dry out quickly and easily. So, when cucumbers grow in sandy soils, they usually require extra irrigation. Clay soil, on the other hand, retains water and compact when wet.

To improve drainage of soils such as clay soil, in order to have improved supply and movement of water around the cucumber plant roots, you can add peat or compost to the soil bed before you plant your cucumbers. Cucumbers can also grow successfully in less optimal soils but with proper irrigation.

The local climate of a zone determines how often to water cucumber plants. Local climate factors such as humidity, temperature, wind, light intensity, and day length contribute to the interval at which cucumber plant receives water.

While in climates with lower temperature, high humidity, low light, and low wind, cucumbers plants grown there require a lesser amount of water, when compared with its counterparts in hotter climes.

3. Plant stage and its density

The amount of water a cucumber plant needs is also dependent on the stage and density of the plant. If there are more cucumber plants per acre of land, there would be more demand for water.

When it comes to the stage of the plant, smaller plants demand a lesser amount of water than larger plants. Also, when the cucumber plant is at the fruit sizing stage, it would require more amount of water since fruits such as cucumber are more than 90% water.

The best way to find out how often you should water your cucumber plant regardless of the local climate and quality of the soil available is not to speculate but to measure how the cucumber plants absorb water from the soil.

Estimated values of how water moves from the soil to the plant roots can be gotten from a daily evapotranspiration table. However, actual values are obtained by installing soil moisture monitoring sensors.

There are different types of soil moisture monitoring sensors in the market. They range from sensors that are relatively inexpensive to those that are very expensive.

Now, exactly how much water does a cucumber plant need per day?

Let's quickly find out below:

How Much Water Does a Cucumber Plant Need per Day? 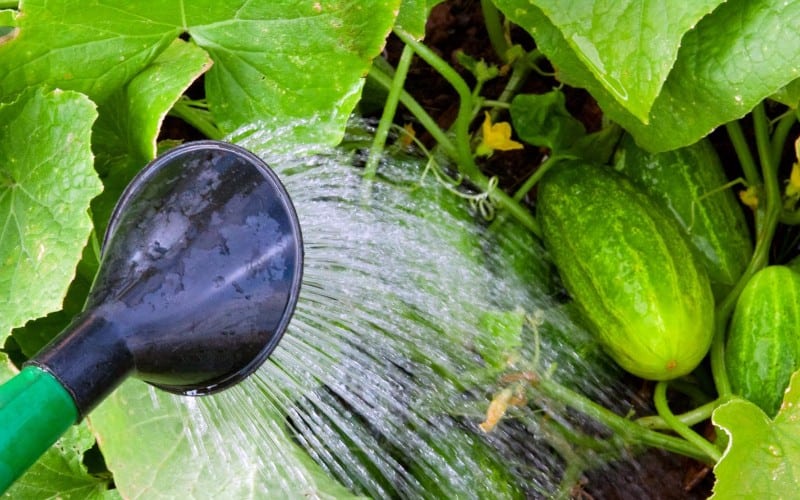 Cucumber plants require a lot of water in order to grow properly. They inherently have shoot roots, which makes its irrigation very difficult.

But if the weather temperature is low and not up to 90 degrees, you should water the cucumber plants once per day. This would be sufficient for the plants. You should, however, not allow the soil to become soaked, being moist is good enough.

It can also lead to wilting the cucumber plants. The best time to water cucumber plants is either in the early hours of the morning or late in the evening when the plants are not receiving full sunlight.

Some people also lay down newspaper under the mulch; this improves the level of protection given to the plant.

Effect of Overwatering a Cucumber Plant 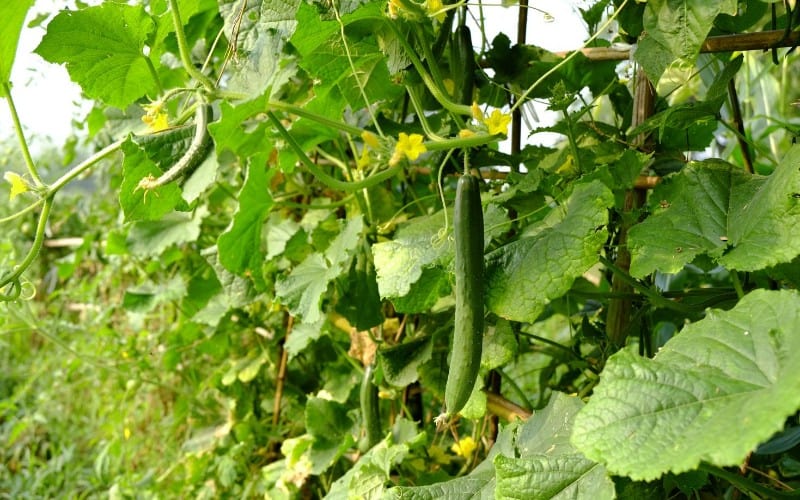 Because cucumber plants are considered to be water-loving, a lot of people assume that giving it a lot of water would be helpful to their growth and development. This doesn't seem right because, in the real sense of it, you are overwatering the plant.

Overwatering cucumber plants is one of the worst things that you can erroneously do to your plant and garden. Too much water has the ability to damage the plant and can also kill the plant by letting the roots sit in damp soil and by taking away useful oxygen from the soil.

On the contrary, moderately watering the cucumber plant encourages the plant to develop strong deep roots, rather than weak roots. Other effects of overwatering a cucumber plant include the following:

Powdery mildew is caused by the overhead watering of the cucumber plants. Powdery mildew grows on older leaves and makes them wilt and turn yellow.

Cucumber fruits are usually not directly affected by powdery mildew. Still, they can become sunburned when the large leaves that serve as protective leaves have become wilted and wither away, thus leaving the fruits exposed.

Cucumber plants that grow in clay soils are usually susceptible to root rot; this is because the soil retains so much water than draining them off. Roots that sit prolonged in such soil will develop fungus that would eventually kill the plant roots.

Humus materials such as decomposing leaves or straw will greatly improve drainage of such soil, and prevent root rot from occurring.

When leaves turn yellow as a result of overwatering, they become limply and eventually fall off. When you notice this, reduce watering immediately. Water should not be left to stand at the base of the plant.

Read Also: How Many Cucumber Plants Per 5 Gallon Bucket?

Conclusion | How Often To Water Cucumbers

Cucumber needs an optimal amount of water per day to thrive and develop an economically good size of fruit; however, care should be taken as not to overwater the plants.

The effects of overwatering the plant are not pleasant in any way. If you afford the moisture monitoring sensor, get one for your plant as it would help you monitor the rate of transpiration and inform you on how much water a cucumber plant needs per day.