You probably know about French Marigold and other popular flowers that start with F in their name, right?

Well, it might interest you to know that there are lots of other cute flower names that begin with the letter F and we're going to list some of them in this article.

These flowers can be planted in gardens, and you can also see them in specific regions, where they grow naturally.

Names of Flowers That Start With F 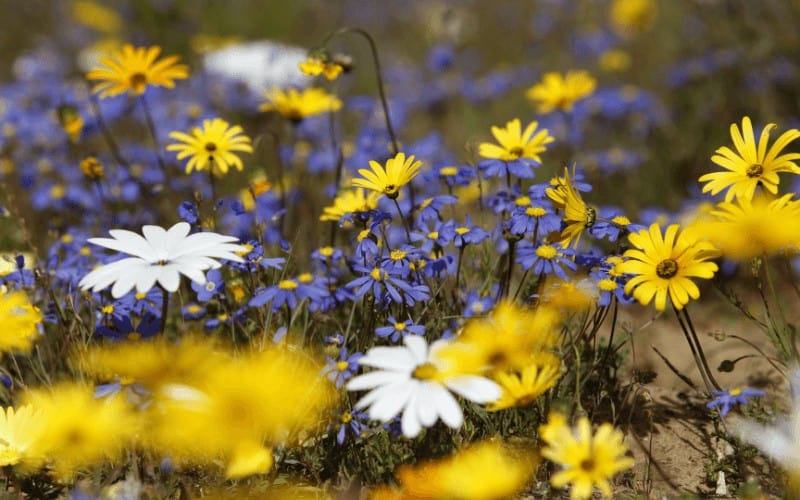 Common names for this species include blue daisy, bush Felicia, and blue Felicia. It is a bushy plant, grows as ground cover, and produces many regular branches.

This species can grow up to 50cm tall, and the flower attracts butterflies. 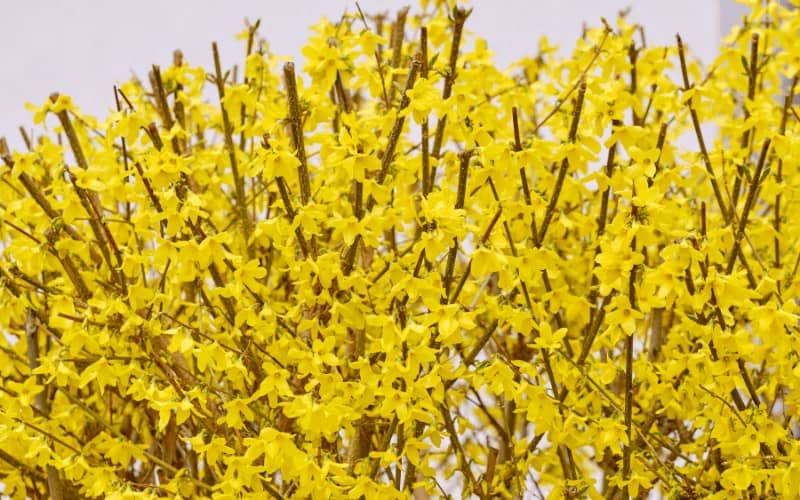 Forsythia is a genus of 11 species of flowering plants in the Oleaceae family. It is native to East Asia - with one species noticed in southeast Europe.

One of the common names of Forsythia was named after William Forsyth. The species are long-lived, fast-growing deciduous shrubs that produce clusters of vibrant yellowish flowers, which typically appear before the leaves.

When drenched, the flowers turn to look like a pendant to protect their reproductive parts. 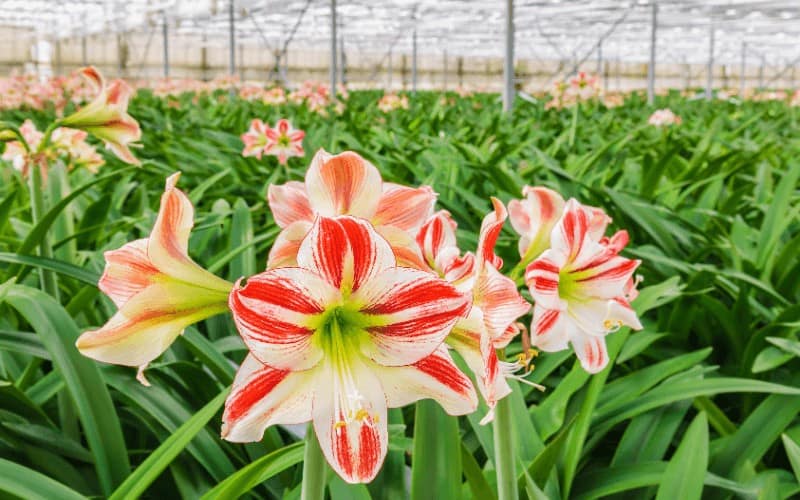 Freesia was first described as a genus in 1866 - it is still seen as a genus of herbaceous flowering plants with about 20 species in the family Iridaceae.

Freesias have a pleasant fragrance, and they are among the most popular flowers in the world. 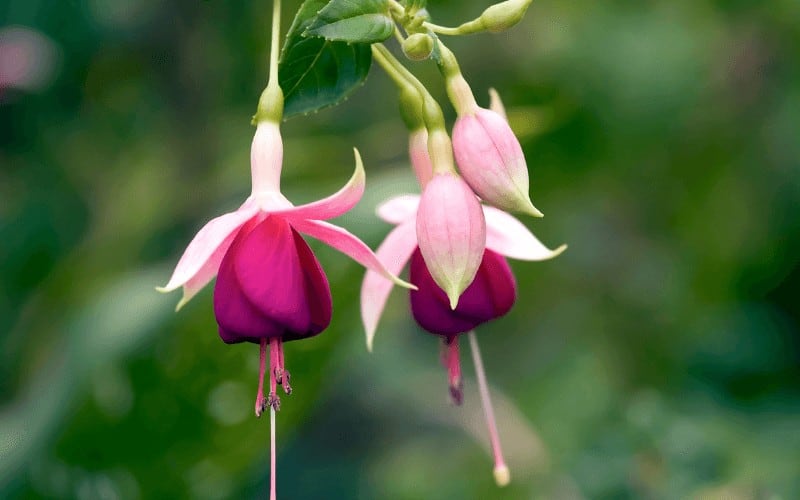 Fuchsia is a genus of over 100 species of flowering plants in the family Onagraceae - diversifies as deciduous, evergreen shrubs, or small trees.

The scientific name for this genus is Fuchsia triphylla; it was first seen on the Caribbean island of Hispaniola.

The species of this plant produce pendant flowers with combined colors of white, red, pink, and purple. 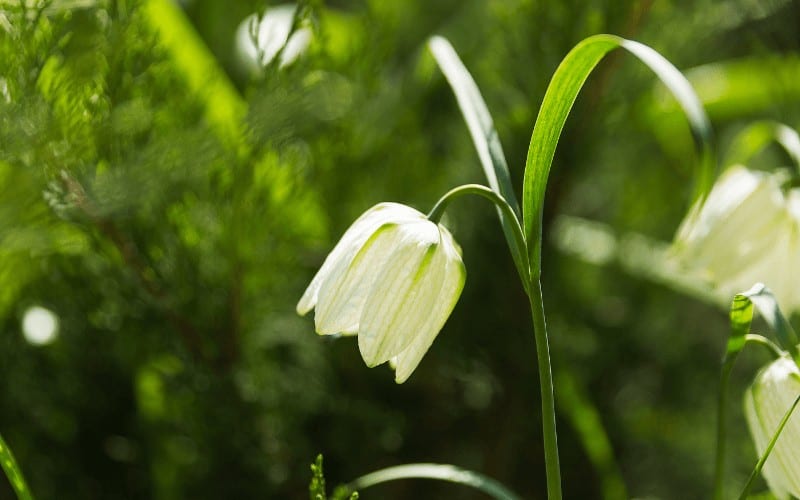 Fritillaria is a genus of over 100 species of spring-flowering herbaceous plants in the lily family, Liliaceae. The species are endemic to the northern hemisphere.

One of the species, Fritillaria meleagris, was first described in 1571 in Europe. Other species were spotted in the Middle East and Asia within that year. 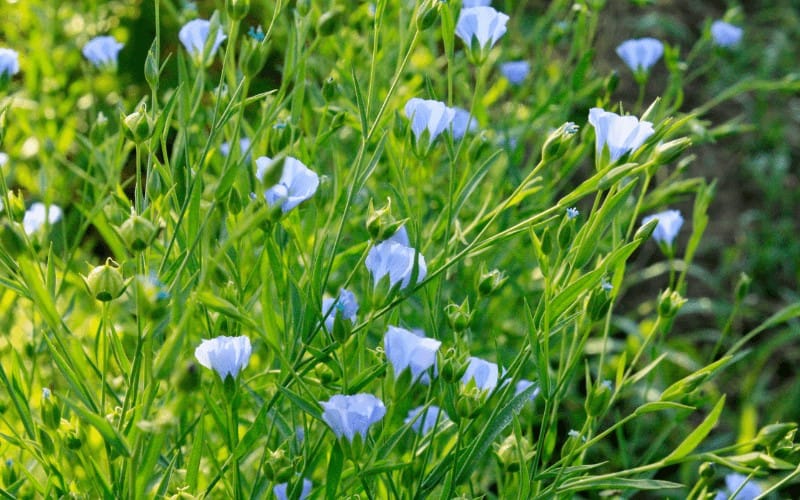 The flax flower (Linum usitatissimum) is a species of the Linum genus of flowering plants. 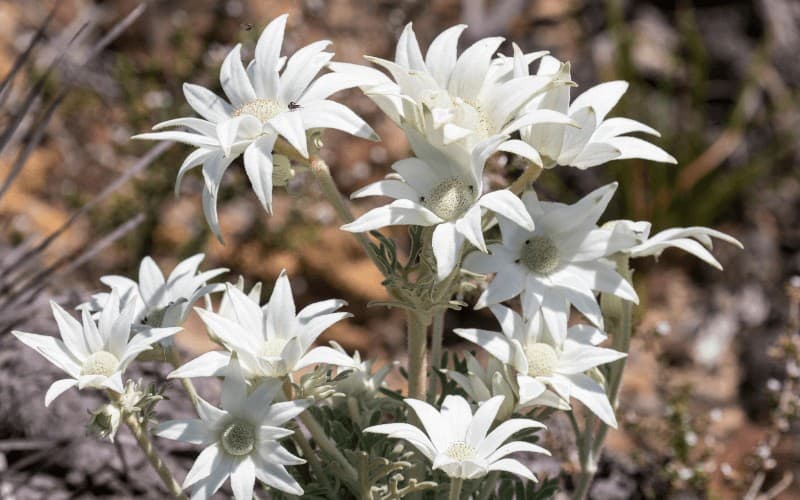 Its name comes from the Novae Hollandiae Plantarum Specimen of the French botanist, Jacques Labillardière.

This flower species is short-lived and grows in full sun or part shade, mostly found in many areas in Australia. 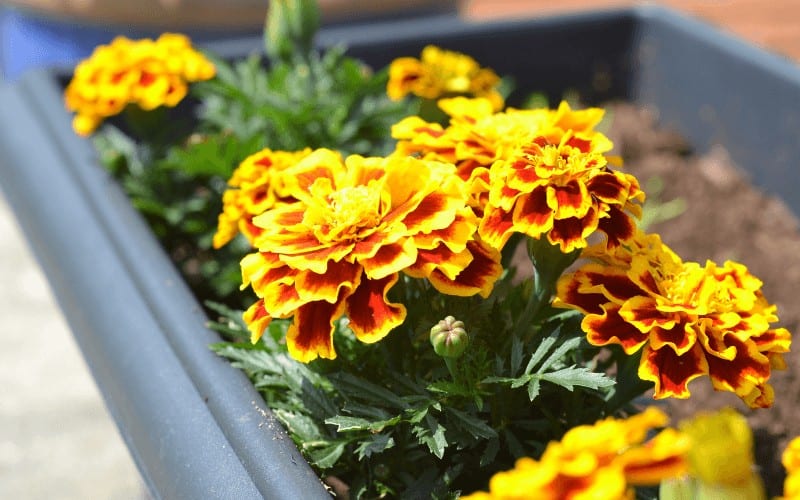 French Marigold (Tagetes patula) is a species of flowering plant in the daisy family. Although the name “French Marigold,” this species is endemic to Mexico.

Marigolds can grow up to 12-inch tall - or even taller - as erect bushes or low mounds. Tagetes Patula has several naturalized populations in other regions. 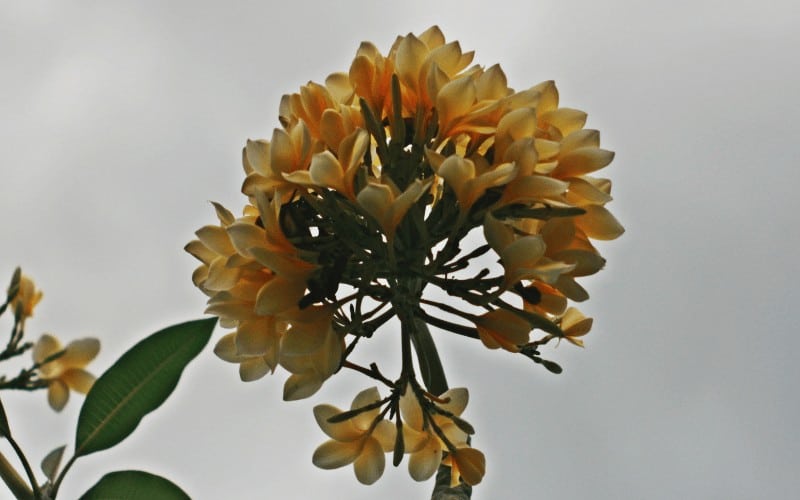 Frangipani, a.k.a Plumeria, is a genus of flowering plants in the Apocynaceae family. Its species can grow up to 20ft tall and they are mostly deciduous shrubs or small trees.

The species are native to Central America, Mexico, the Caribbean, southern Brazil, and northern Florida. However, Frangipani is grown in most warm regions. 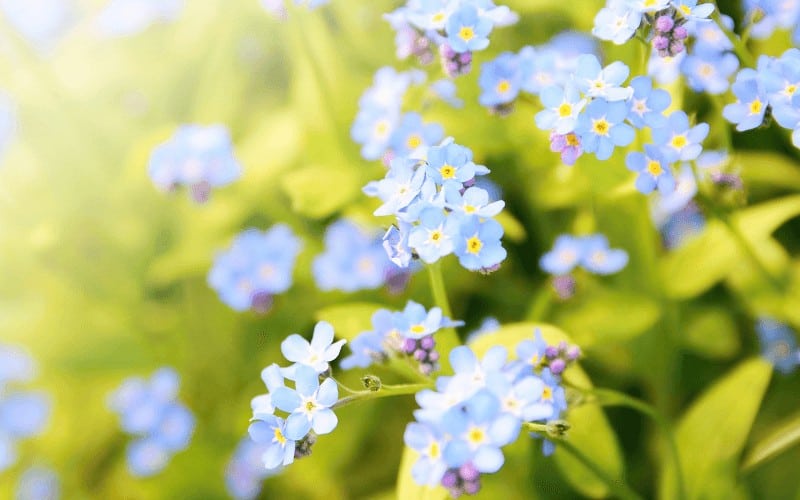 Forget Me Not is the colloquial name of the plant genus, Myosotis. Other names for this genus include scorpion grasses and mouse's ear.

Myosotis alpestris is the official flower of Alaska and Dalsland, Sweden. The Myosotis genus has over 500 species, but only 74 species are accepted.

The species are common throughout temperate latitudes. 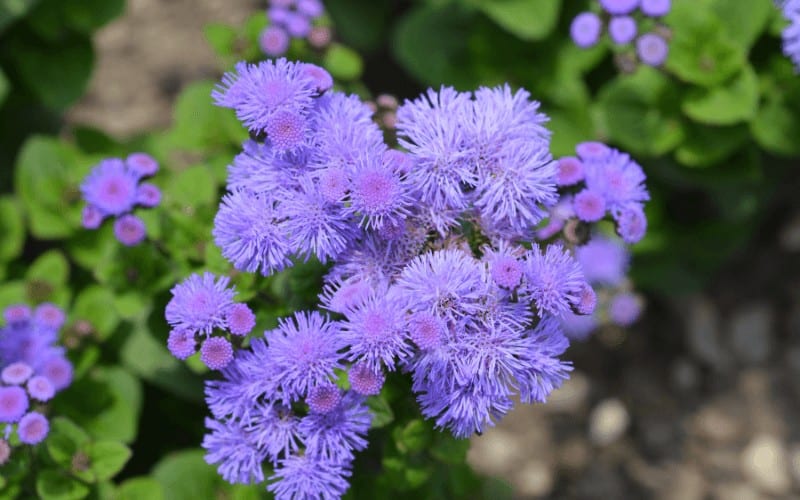 Flow Flower has about 40 species and belongs to the Aster family. This species can grow up to 2 feet tall and produces long-lasting blue flowers. 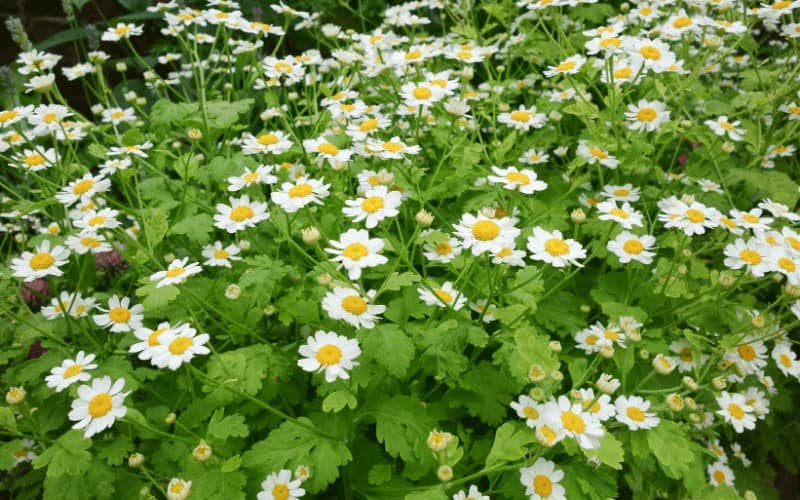 Feverfew is a species of flowering plant in the daisy family, endemic to Asia Minor and the Balkans.

However, this species is grown in different countries and regions, globally. The scientific name for Feverfew is Tanacetum parthenium, it is part of the family Asteraceae.

This flower is a traditional medicinal herb for treating migraines. 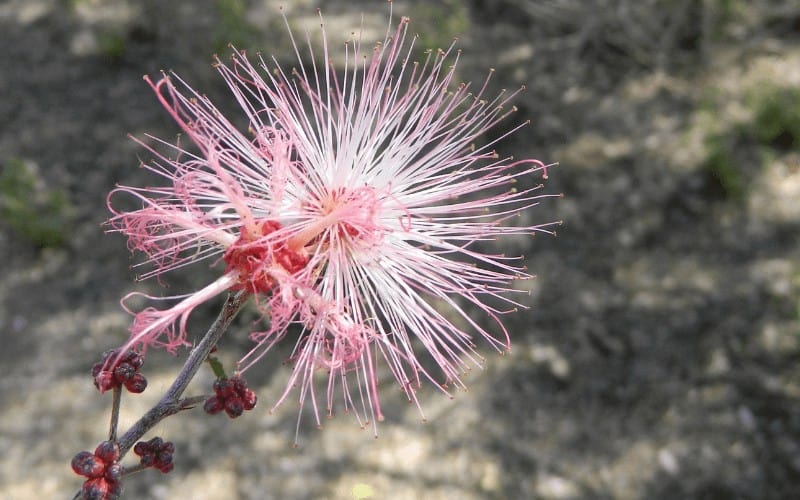 Calliandra eriophylla, a.k.a. Fairy Duster, is a low-spreading, sun-loving, evergreen shrub, native to Arizona, the arid grasslands in California, New Mexico, and Texas.

Fairy Duster does not grow well under shades and it is drought resistant. The plants bloom reddish or pinkish fluffy flower balls, about 1-inch wide. This species belongs to the family Fabaceae. 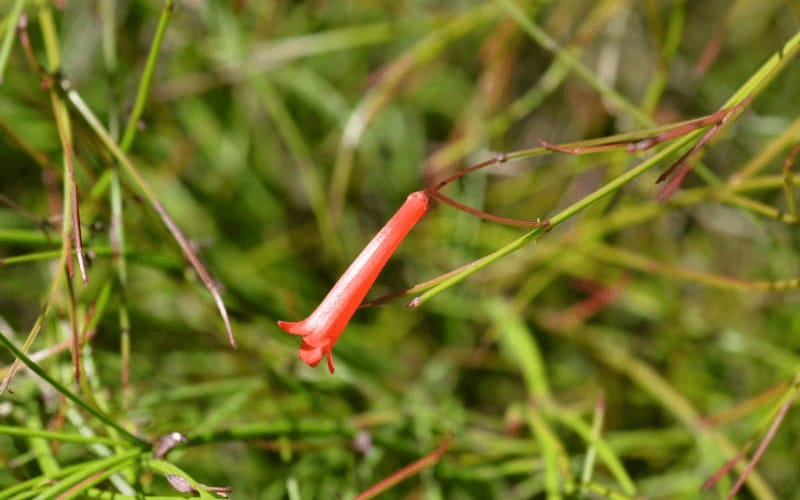 Firecracker Flower (scientific name Crossandra infundibuliform) is a species of flowering plant in the Acanthaceae family.

This species is endemic to southern India and Sri Lanka. However, it is mostly spotted in the Malenadu and Kerala regions, southern India. 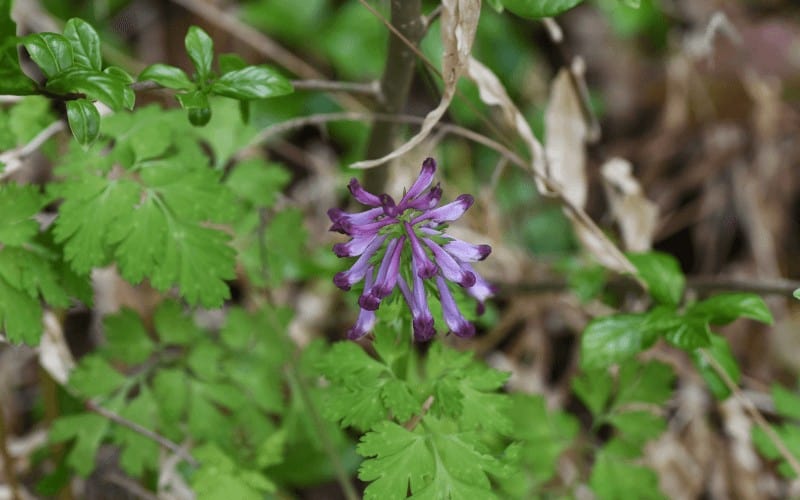 Corydalis Solida, a.k.a. The Fumewort, is a species of flowering plant in the Papaveraceae family. It is usually grown - or seen - in moist, shady habitats across Asia and northern Europe.

The plant grows up to 25cm with foliage that appears in spring and dies in summer - down to the plant’s tuberous rootstock. 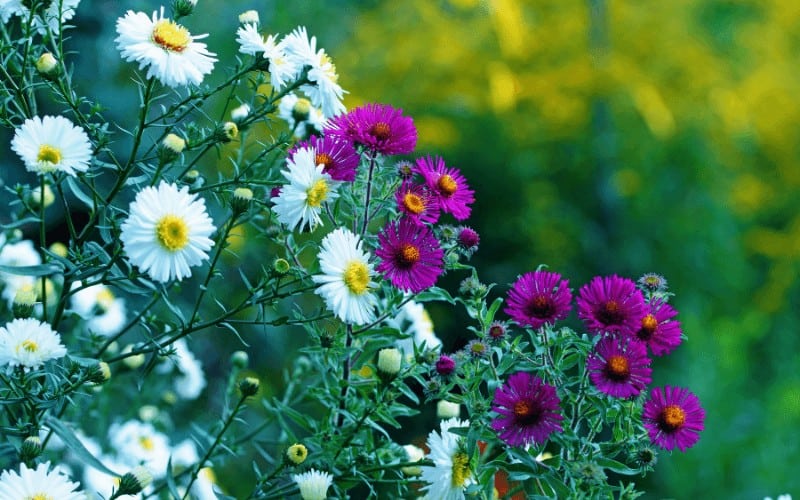 Frikart's Aster is a hybrid flower created by Carl Ludwig Frikart, a Swiss plant breeder. Thus, the plant’s name was curled from the creator’s name.

Other names for this hybrid include Aster frikartii (Aster × frikartii). It was created by crossing the European Michaelmas daisy, Aster amellus, and Thomson's aster.