If you are looking to add a touch of tropics to the landscape around your home, then the dwarf banana tree should be your go-to plant.

Bananas are one of the stress-free plants to grow, all thanks to their quick growth rate, ability to thrive in poor soil, and their relatively pest-free nature.

When it comes to dwarf banana tree care, dwarf banana trees such as the “Dwarf Cavendish” or “Dwarf Brazilian” are easier to manage, because they do not grow as big as their other cousins that are larger.

Dwarf Cavendish banana tree, also known as ladyfinger banana is a widely grown banana tree whose name was derived from the height of its pseudostem, and not its fruit as most people think. It originates from East Asia.

Their shortness makes them stable, resistant to wind, and generally easy to manage. Additionally, they are fast-growing, and this makes them people’s favorite banana trees.

The dwarf Cavendish, as approved by NASA, is an indoor air purifier. It is capable of efficiently removing a reasonable amount of formaldehyde that could be released into a home by treated indoor furniture. 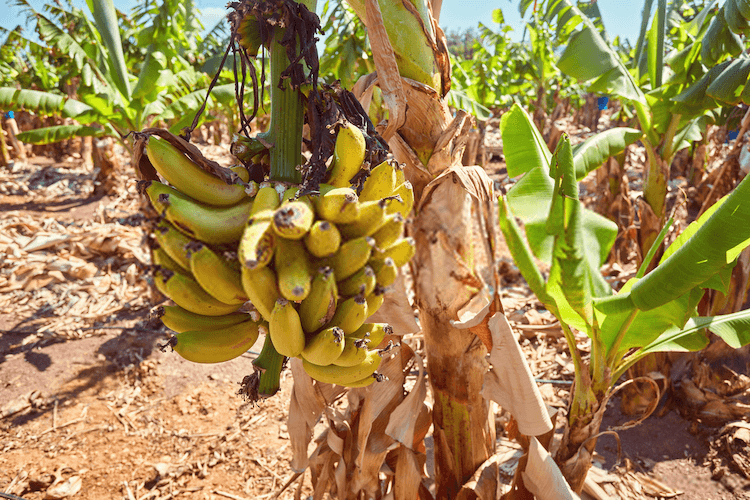 Dwarf bananas are best grown indoors because of their height and size that occupy less space in a home, unlike the regular large ones. However, you would need a big pot that is deep enough to contain its many roots. This pot should also provide adequate drainage.

While dwarf banana trees do well in rich humus soil, it also requires a soil whose pH levels are between the values of 5.5 to 7.0; thus, it thrives in slightly acidic to neutral soil.

During planting, ensure that the banana rhizome is upright, and its roots are well covered with soil. The soil should be continuously watered but not excessively as this would leave it in a pool of water that would lead to root rot. The rule is water the soil only when the plant has dried out some water.

Dwarf bananas require warm temperatures to thrive, ensure that your home is humid enough for them. They require night temperature of about 67 degrees F. (19 C.) are ideal and day temperatures in the 80s (26 C.).

Typically, a healthy dwarf banana tree that is well cared for, with adequate access to water, warmth, and nutrient, will easily grow an inch in a week or more. However, dwarf banana trees grown indoors do not usually fruit. They provide beautiful aesthetics but not fruits. 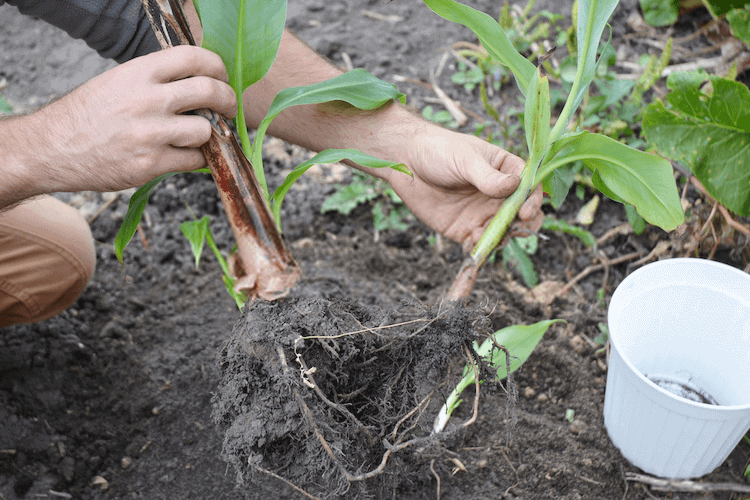 The care tips for dwarf banana would be discussed under different subheadings below for better understanding and application. Without any further ado, let’s get started.

As a precautionary tip, do not grow a dwarf banana tree in a soil that had shown signs of fusarium fungal infection. Use well-amended sterile potting soils that are of high quality in the planters and the outdoor site.

Boost the soil in your planting site or potting mix by adding some fertilizer to each of them. In addition to adding compost as a boost, you can add peat moss or vermiculite for improved moisture retention. For improved aeration and drainage, add 20% perlite.

If you wish to add compost to the soil, do not use freshly produced compost. That is because freshly composted material is warm, and warmth retards plant growth or even damage the banana corm. So use an aged compost material.

After planting your dwarf banana tree, mulch the base to a depth of 4 inches to keep in moisture and discourage the growth of weed.

During the frosty winter period, there is a need to bring in the dwarf banana tree indoors to safeguard it from the cold weather. While indoors, provide the plant with adequate light and place it in a comfortable condition that would not hinder its growth.

Dwarf banana trees grown in pots and containers will require more water than those grown in the ground. That is because soils in containers dry out faster. To avoid the risk of under watering or overwatering water, the soil when it has dried out on top by half an inch. Never allow the potting mix to be left soggy.

Mulching the base of the plant also helps in conserving moisture in the soil. Generally, dwarf banana trees enjoy high humidity. They thrive at a humidity level of 50 percent and higher.

Dwarf banana trees feed a lot. They require a monthly fertilizer application for optimal growth and development. Fertilizers that are high in phosphorus, such as 8-10-8, are ideal for dwarf banana trees. However, if you do not find such fertilizer, you can use a balanced fertilizer such as 10-10-10.

Young dwarf banana trees need 65 to 75 percent strength fertilizer. If you are growing the plant with the hope of getting some fruits, you would have to use a fertilizer that is high in potassium.

But if you are growing your dwarf banana tree indoors, you don’t need to apply fertilizers heavily on it. Dwarf bananas grown indoors do not grow fast; they are quite slow in growth and would require just 50% of the fertilizer used on a dwarf banana tree grown outdoors.

When growing a dwarf banana tree, you should use a large and deep pot with a good-sized drainage hole that should allow at least about 3 inches of space on every side of the corm or banana base. But some people make mistakes in picking the appropriate pot for the dwarf banana tree.

To re-pot a wrongly potted plant or a grown plant, select the most suitable pot as described above. Fill the lower part of the pot with sterile potting soil that is new and has been mixed with fertilizer.

In a careful manner, remove the dwarf banana tree from its old pot. Shake off loose soil particles and set the plant into the new pot.

Fill up the spaces in the pot and around the plant with new sterile potting soil that has been amended with fertilizer. Then place a 4 inches layer of mulch on the soil.

A dwarf banana tree will stop growing when it becomes root-bound. To encourage new growth, you should re-pot it or cut parts of the corm if you wish to retain the same pot.

Now, watch the short video below to learn more about how to grow dwarf banana tree inside:

Caring for a dwarf banana tree can be tasking, but the maintenance is well worth it at the end because, aside from producing succulent fruits, they add a beautiful aesthetic to homes and gardens.

Hi My tree is in a big pot but now it seems to be dying, can giving it to much fruit tree fertilizer or cut the new sprouts off kill it? I have had it over 2yrs but still no fruit. Now I have changed the soil hoping it will bring it back to life

Hey, I'm Matt, and I come from a family of farmers. I have a big garden in my backyard where I grow a variety of flowers, vegetables, and houseplants. Gardening Bank is where I share my knowledge from years of experience and practice.

We use cookies on our website to give you the most relevant experience by remembering your preferences and repeat visits. By clicking “Accept All”, you consent to the use of ALL the cookies.
Cookie SettingsAccept All
Manage consent

This website uses cookies to improve your experience while you navigate through the website. Out of these, the cookies that are categorized as necessary are stored on your browser as they are essential for the working of basic functionalities of the website. We also use third-party cookies that help us analyze and understand how you use this website. These cookies will be stored in your browser only with your consent. You also have the option to opt-out of these cookies. But opting out of some of these cookies may affect your browsing experience.
Necessary Always Enabled
Necessary cookies are absolutely essential for the website to function properly. These cookies ensure basic functionalities and security features of the website, anonymously.
Functional
Functional cookies help to perform certain functionalities like sharing the content of the website on social media platforms, collect feedbacks, and other third-party features.
Performance
Performance cookies are used to understand and analyze the key performance indexes of the website which helps in delivering a better user experience for the visitors.
Analytics
Analytical cookies are used to understand how visitors interact with the website. These cookies help provide information on metrics the number of visitors, bounce rate, traffic source, etc.
Advertisement
Advertisement cookies are used to provide visitors with relevant ads and marketing campaigns. These cookies track visitors across websites and collect information to provide customized ads.
Others
Other uncategorized cookies are those that are being analyzed and have not been classified into a category as yet.
SAVE & ACCEPT