If you’ve been looking to learn how to get root bound plants out of pots, this is the perfect guide for you.

Let’s face it: Plants grown in pots and containers provide the easiest means of bringing a touch of nature to your home, and to areas that would ordinarily not have green lives in it. Potted plants make this possible.

Re-potting is critical to the optimal growth and vitality of potted plants. When you do not re-pot these plants as at when due, they become root-bound and unhealthy.

In this article, we’re also going to look at some of the plants that like to be root bound, as well as how to repot a plant that is root bound.

How Do You Know When Your Plant is Root Bound?

You can tell that your potted plant has become root bound if the roots are growing on the sides of the pot inside, or when the roots are sticking out of the drainage holes at the base of the pot. 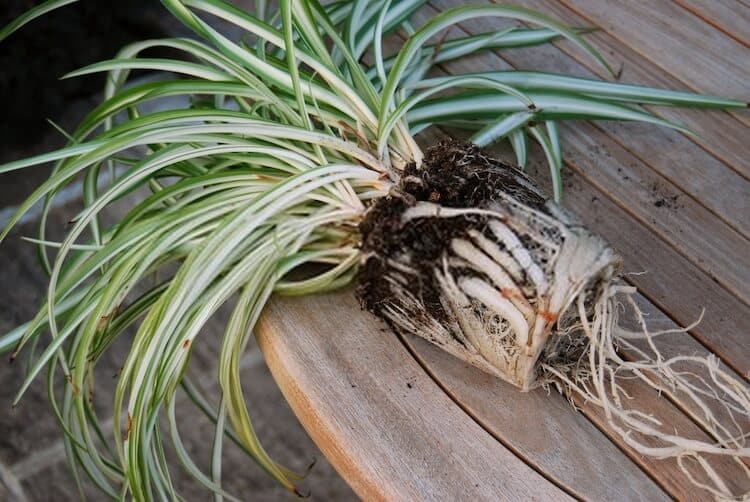 A root bound plant is a plant whose roots are bound by some kind of barrier. It is usually a result of a healthy plant outgrowing its pot or container. When the roots develop, they become too big for the container.

Root bound plants also occur as a result of growing plants in small pots. These plants quickly outgrow the small pots and become root bound in a small matter of time.

Also, the plants grown outside suffer from root bound if their roots get caught between solid barriers like foundation walls, pipers, or footers.

Signs That a Plant Has Become Root Bound

A plant becomes root bound when its roots have become developed and outgrown its container. Sometimes, most gardeners do not recognize when their plants have become root-bound. However, some telltale signs of root bound plants include yellowing of leaves.

Root bound plants show symptoms similar to under-watered plants. So if you water your potted plants as at when due but yet they show symptoms such as yellowing or browning of leaves, wilting of leaves, and stunted growth. There is a clear indication that the plant has become root bound.

Root bound plants do not also receive adequate nutrients right round it as a result of being compact. This also results in stunted growth and wilting of leaves.

Another means of confirming whether your plant is root bound is by taking a good look at the roots. To do this, you gently slide the plant out of its pot, and if the plant doesn’t come off easily, then the roots are bound.

If this happens, you would have to ease out the plant with a knife, loosening it up from around the edges. 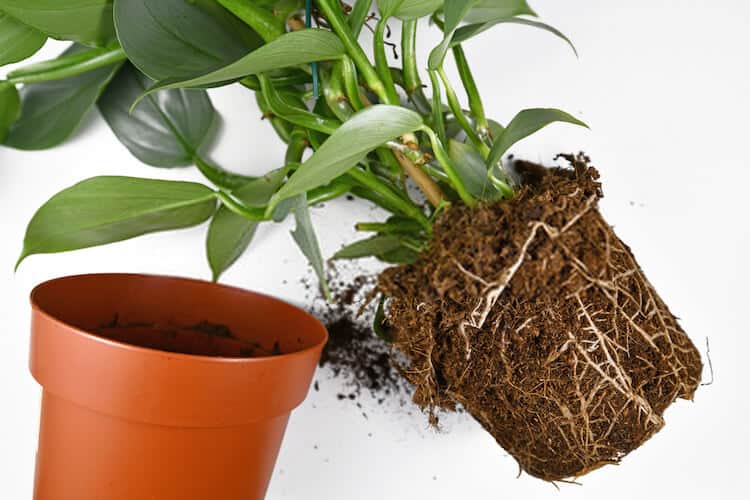 While re-potting is an essential care tip to ensuring optimal growth and vitality of potted plants, some plants enjoy being root bound. Such plants thrive under root bound conditions.

Some of the plants that like to be root bound include:

When to Re-pot Root Bound Plants

The spring and summer are usually the best times to re-pot root bound plants. That is because the energy levels and growth speeds of the plants at those times are at their highest.

If a root bound plant is re-potted and transplanted during other times, the plant would require a longer time to re-establish itself in its new pot and get over the stress of being re-potted. That is because those other times are slow-growing seasons for plants.

Read Also: When To Plant Okra In Arkansas

How to Get Root Bound Plants Out of Pots 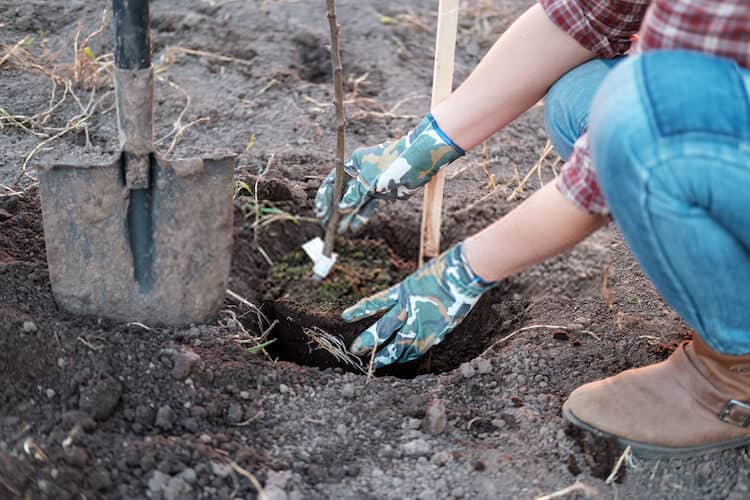 Let’s now look at how to get root bound plants out of pots.

Here, we shall be explaining three methods by which you can get root bound plants out of pots.

This method is used for plants whose roots are not entirely matted all around the root ball. Such plants set up easily in new pots.

To re-pot a root bound plant with this method, you would have to water the plant adequately a day before the re-potting day. Watering the plant would help soften the plant roots, and get rid of crusty soils that could have clumped together at any part of the root ball.

Gently loosen and untangle roots that are tangled or plunged into the drainage hole at the base of the pot. Also, before re-potting, clean up broken roots.

When you are done loosening and untangling the roots, then you can re-pot the plant. To re-pot the plant, you would need to add just a few inches of soil to the new pot, which should be bigger than the former pot.

The new pot, while containing a few inches of soil, will also need you to add some compost in it, and a mix of potting soil before placing the plant.

After placing the plant in the new pot, fill the empty spaces with extra soil but do not pack down the soil. Also, the plant’s stem should not go down below the level it was before being re-potted.

Ensure the new pot has drainage holes and placed on a platform where it can freely drain out water. Because the plant has been adequately watered before being loosened and re-potted, do not water the re-potted plant until its soil has dried.

This method is adopted when a root bound plant is not receiving adequate nutrients as it should, and you do not want the plant to grow bigger than it already has. So, invariably, you want the plant to stay healthy but retain its current size. You prune the roots.

To do this, you take the plant out of its pot and prune down the edges of the smaller hair-like roots called thread roots up to at least three times its original size with a clean, sharp knife.

While pruning, steer clear of the thicker roots, that is, the taproots. Pruning the taproots will harm your plant.

When you are done pruning the thread roots, replant in the old pot or a new pot and wait until the soil is dried up before watering the plant.

Read Also: When To Plant Strawberries In Alabama

This method is used for plants that grow from a central crown and have a habit of clumping up. Such plants usually have their root balls divided into two or three parts every few years.

Each part is re-potted into a new pot with fresh soil, compost, and a mix of potting soil. This offers a new life to the formerly dying plant in two or more pots. Rootballs are best divided during winter when the plants are dormant.

How to Repot a Plant That is Root Bound

Before you re-pot a root bound plant, ensure to pick the right time for re-potting. Re-potting is best carried out during spring or summer when the plants are active.

Also, water the pot first. Watering the pot softens the root balls and the soil, and ensures that the plant is easily removed from the pot.

Now, after re-potting, to ensure that the plant adapts to its new pot and does not continue to grow in its former compact shape, prune about one-third of the root ball. Also, tease and gently pull the remaining roots to free them and reveal more of the root system.

Having learned how to get root bound plants out of pots, your plants should never be caught unhealthy as a result of being root bound.

However, if the plant is one of those plants that enjoy being root bound, you need to take care of it and allow it to blossom under its preferred condition.

Hey, I'm Matt, and I come from a family of farmers. I have a big garden in my backyard where I grow a variety of flowers, vegetables, and houseplants. Gardening Bank is where I share my knowledge from years of experience and practice.

We use cookies on our website to give you the most relevant experience by remembering your preferences and repeat visits. By clicking “Accept All”, you consent to the use of ALL the cookies.
Cookie SettingsAccept All
Manage consent

This website uses cookies to improve your experience while you navigate through the website. Out of these, the cookies that are categorized as necessary are stored on your browser as they are essential for the working of basic functionalities of the website. We also use third-party cookies that help us analyze and understand how you use this website. These cookies will be stored in your browser only with your consent. You also have the option to opt-out of these cookies. But opting out of some of these cookies may affect your browsing experience.
Necessary Always Enabled
Necessary cookies are absolutely essential for the website to function properly. These cookies ensure basic functionalities and security features of the website, anonymously.
Functional
Functional cookies help to perform certain functionalities like sharing the content of the website on social media platforms, collect feedbacks, and other third-party features.
Performance
Performance cookies are used to understand and analyze the key performance indexes of the website which helps in delivering a better user experience for the visitors.
Analytics
Analytical cookies are used to understand how visitors interact with the website. These cookies help provide information on metrics the number of visitors, bounce rate, traffic source, etc.
Advertisement
Advertisement cookies are used to provide visitors with relevant ads and marketing campaigns. These cookies track visitors across websites and collect information to provide customized ads.
Others
Other uncategorized cookies are those that are being analyzed and have not been classified into a category as yet.
SAVE & ACCEPT